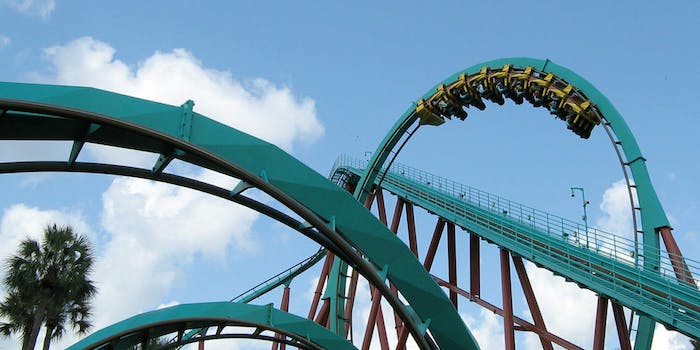 This is just mind-bogglingly evil.

RollerCoaster Tycoon enthralled all of our childhoods, providing hours of design opportunities that encouraged players to manipulate park guests as they pleased. With Tycoon, we were gods among tiny, faceless people, and sometimes that authority inflated our sense of selves.

Some children valued the interface, building marvelous amusement parks fit for Michael Jackson’s dreams. Other, much sicker children delighted in abusing roller-coaster riders, putting them on unfinished tracks and prompting them to hurl toward their imminent death. Our behavior in RollerCoaster Tycoon was a reflection of ourselves, and those who chose to torture park guests harbored an inner monster.

One sinnister user demonstrated gave new meaning to the term “monster” by creating a ride design so foul and torturous that it blew up on Tumblr after making its way there from 8chan.

The Tumblr crowd is not easily impressed, but it bowed before gamer “Kairos- The Slow,” who designed a ride that would starve passengers to death before they reached the end.

“When a roller coaster travels along a track of constant height its speed exponentially decays towards zero but never stops,” Kairos- The Slow explained. “With this in mind I build a spiral track on the biggest map. The train comes out of the station and hits breaks with slow it down to 4 [miles per hour]. then it travels along the track, always losing speed but never stopping, until it gets to the center. where it rolls back and does the spiral again until it gets back to the station.”

By this logic, it would take roller-coaster passengers 3,000 days to finish this torturous ride. It would also take 210 days for any player to finish. RollerCoaster Tycoon was developed in the dark ages of dial-up Internet, but no millennial can stand the idea of videos buffering, much less waiting 303,383 minutes to watch a meaningless simulation.

The only other roller-coaster setup even remotely as devious and unpleasant as Kairo- The Slow’s contraption is Mr. Bones’ “Wheel of Life,” which takes about 60 minutes to complete and features simultaneously creepy and irritating Gregorian chants.

Although insufferable, it’s no match for the unbearable experience of the creation of “Kairos- The Slow”.