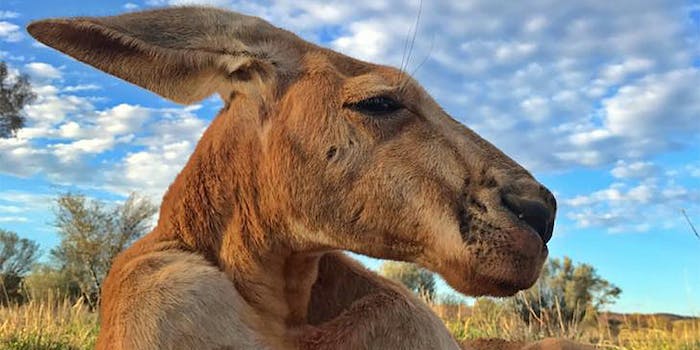 Roger the buff kangaroo has died at the age of 12

Heaven just got one buff kangaroo.

Roger, the extremely muscular kangaroo who became an internet sensation in 2015, has passed away from natural causes at the age of 12.

Roger first gained the world’s attention in June of 2015 when CNN posted a video the included a picture of the massive marsupial crushing a metal bucket.

Roger weighed 200 pounds and was 6-foot-7, which is pretty much the top end of the scale for red kangaroos, the world’s largest marsupial.

A man named Chris Barnes rescued Roger in 2006 when the Kangaroo was only a baby.

“I rescued Roger out of his mother’s pouch in 2006,” he told BuzzFeed back in 2015. “She was dead on the side of the road and he weighed under a kilogram.”

Barnes went on start a Kangaroo sanctuary in Alice Springs, Australia, and Roger became the alpha male, eventually having over 12 kangaroo wives.

“Roger’s muscle is human-like,” said Barnes. “He appears to have the same muscles that a bodybuilder has, really defined biceps and triceps.”

Barnes theorized that Roger caught his reflection in the shiny metal bucket and, mistaking it for a rival male, crushed it in a bear hug.

“I was feeding Roger and put down the bucket to get some water,” Barnes said at the time, “He maybe saw his reflection, and before I knew it he had gone crazy and bear hugged it—crushing it in a second. A big kangaroo is renowned for crushing dogs trying to kill them. They don’t mess.”

But age had taken its toll on Roger. He developed arthritis later in life, and his vision began to fade. “We’ve lost our beautiful boy,” Barnes said in a touching video posted to Facebook.

Farewell our darling Roger ❤️Sadly Roger has passed away of old age. He lived a lovely long life and was loved by millions around the world. We will always love you and miss you Roger ❤️

Posted by The Kangaroo Sanctuary Alice Springs on Saturday, December 8, 2018

The internet mourned along with Barnes. Many people took time to express their love for Roger and said he would be greatly missed, including Australia’s official Twitter account.

Remembering Roger, the world’s most buff kangaroo, and a true icon of @ausoutbacknt's #kangaroosanctuary.💛

"Many tears will be shed in Australia," Roger the roo dies aged 12. https://t.co/HqHylJnNAp

RIP Roger, the kickboxing red kangaroo who was insanely ripped. I’m hoping @HaidiLun and the entire Sydney broadcast team will add some commentary to his canned obituary today. https://t.co/flYD91oZp9

In the Facebook video, Barnes also noted that Roger’s remains were buried on the sanctuary grounds “so that he can be with his family.”