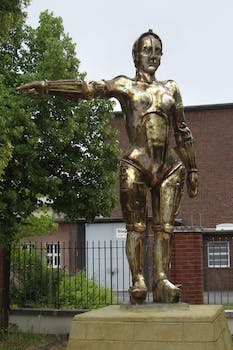 Here's some real-life proof that robots have come to take our jobs.

When you think about robots taking human jobs, you probably imagine a factory assembly line, not a sign-waver on the street.

But YouTube user juliusmarx found a robot engaged in exactly that menial task, advertising a local realtor by essentially acting as a glorified billboard. Most passing drivers would probably think this is a person, which makes it all the more creepy.

Welcome to the Uncanny Valley.

Photo via Havelbaude/Wikimedia Commons (CC BY 3.0)