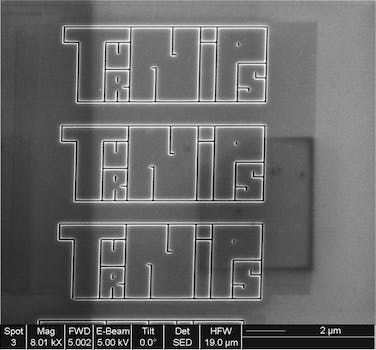 The artist has turned to Kickstarter to revamp Teeny Ted from Turnip Town, which was original published onto a sheet of polished silicon.

The original version was etched onto a sheet of polished silicon by a team led by Dr. Li Yang and Dr. Karen L. Kavanagh from Simon Fraser University. It’s 30 tablets or pages in size, and cannot be seen by the naked eye. The team laid down diamond scratches across the surface as markers so they could navigate to the book once it had been etched. 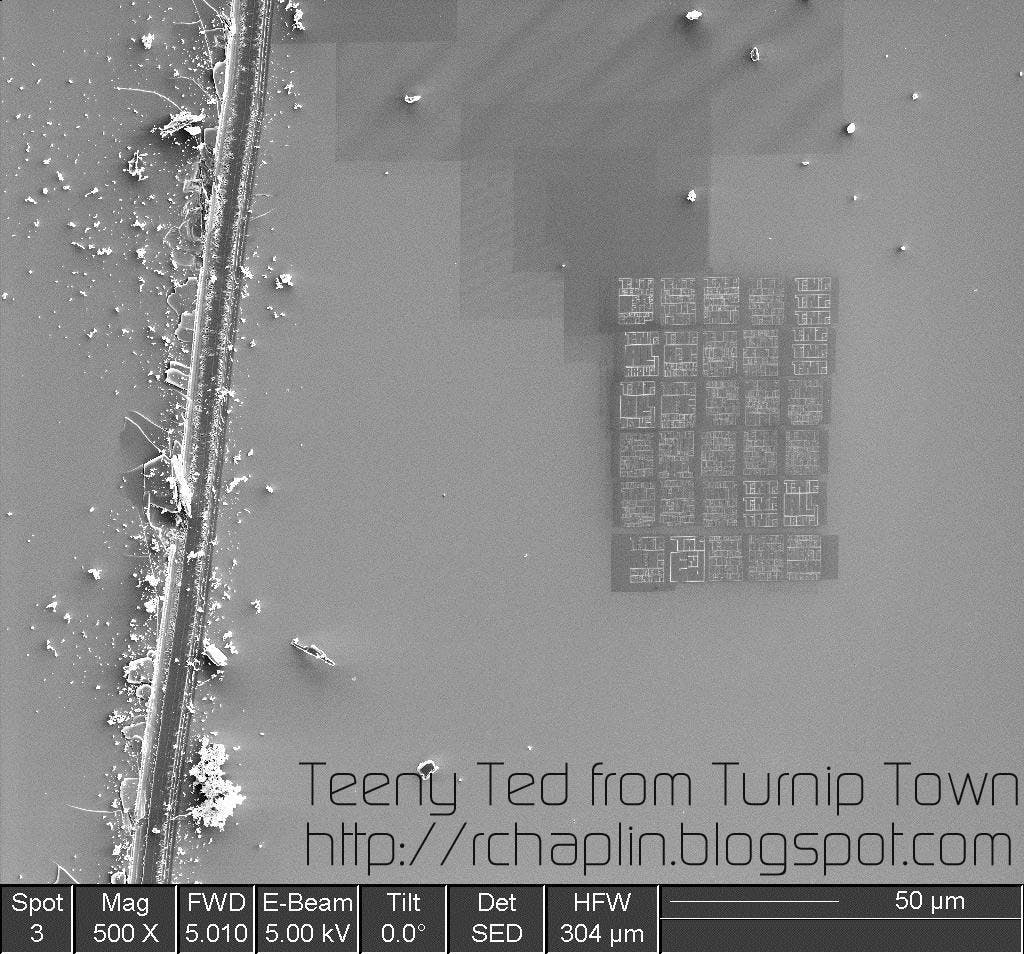 The book is so valuable, in fact, that it’s kept in a bank vault. His new Kickstarter campaign should change that.

Exactly halfway through the month-long campaign, Chaplin is $9,567 away from his goal of $17,000. The project has already been featured on the Huffington Post, and it hit the Tumblr radar last month.

This isn’t Chaplin’s first ambitious project. His style is an uncanny blend of the sophisticated and the childlike, with whimsy and morbidity playing off against one another in unexpected places, and his art crosses many boundaries, encompassing virtually every form of artistic expression imaginable. Take his Malleus Maleficarum, an ordinary hammer adorned with gold and jewels, and formed into a replica of a 15th-Century instrument of the Inquisition. Then there is his book, Brussels Sprouts & Unicorn: A book of rhymes, which one a National Book Award from the Alcuin Society for Best-Designed Children’s Book.

If the large print edition never comes to pass, the original will continue to delight all the angels that can dance on the head of a pin. Everyone else needs a scanning electron microscope.

The Daily Dot spoke with Chaplin about the roots of the project and his art.

Daily Dot: What are your earliest artistic influences and how has it brought you to where you are now as an artist?

I was born in the Smithers hospital, and grew up in the northern interior of British Columbia. My earliest artistic influences came from my father and my grandmother. I was taken to K’San and Kitwancool to see totem poles, which boggled my three-year-old mind! I continued to draw every day, and when I was 14 I went to England for a month, touring museums and was exposed to the entire history of Western art. I audited life drawing, which was a bit of a shock. I learned that there was a lot to learn, and that’s something I’ve carried with me my whole life.

DD: Where, specifically, did you get the idea for Teeny Ted?

Since I had been producing art and having shows it so happened that I met some really awesome people, among them were physicists who became interested in my art. At one point Dr. Kavanagh from SFU invited me to access the Nanolab at SFU to make a carving on a nanoscopic scale. I was fascinated by the possibility of using a new tool kit to produce something innovative and interesting.

I approached the Focused Ion Beam without expectation, in a state of innocent curiosity There was so much to learn: new tools, new language. In time I learned to tune the beam and found that I could program it with bitmap files, which I remembered could be produced using MS Paint. So like a cloistered monk, I painstakingly drew out patterns in Ms Paint and then used this information to program the Ion beam, producing the microscopic tablets comprising Teeny Ted From Turnip Town.

I created a lettering style synthesizing computer rock and late 20th century psychedelia. The resulting work is Roman letters presented as something resembling cuneiform. The irony is that I used a rudimentary piece of software to program a sophisticated machine to make a book in the most ancient form, tablets. To date I have not sold the one and only original copy [originally priced at $20,000, but now available as part of the Kickstarter campaign for $10,000], although I would willingly trade it to see this project come to fruition.

It seemed appropriate to make the worlds smallest book about a little guy with the biggest turnips.

DD: What is the best thing about this book, and why do you want to print it on dead trees in a traditional codex form?

It is difficult to read nanoscopic tablets without the use of a scanning electron microscope. Through scanning electron micrography I am able to print enlargements of the tablets and create a book that everyone will be able to read. Further, I would like to augment the book design by including an explanation of scale from light years to nanometers. Educational components are included in all of my trade hardcovers. A book can only be as important as the knowledge it imparts. As with my other titles, I will be printing 2000 copies. As books go this is a pretty low production run, but it is the most I can afford to produce.

DD: You have a large and loyal patron base in Vancouver. Why did you turn to Kickstarter for this project?

Largely my book publication has been funded by my social network, through book sales and the consignment of more valuable objets d’art to collectors and friends, in order to manage the printers bill.  I decided to do it with Kickstarter this time to reach a broader audience, as well, having access to the Amazon payment system will make it easier to sell books online going forward.