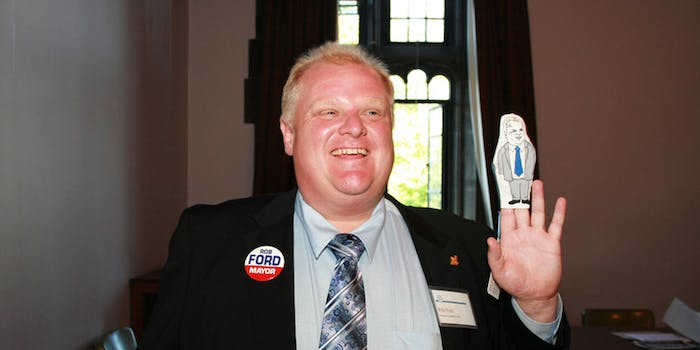 In this platformer, the Toronto mayor jumps over reporters in pursuit of booze. Kinda like in real life.

Toronto mayor Rob Ford’s life is already uncomfortably similar to the main character of vice-fueled video games like Grand Theft Auto. Sure, the mayor doesn’t steal cars, but while holding office, he has partied with gang members, smoked crack, peed in the street, gotten kicked out of sporting events for being too wasted, and boasted about his oral sex skills.

So it’s not much of a stretch to see a little digital version of Ford jumping across the computer screen, soaking up crack and booze and jumping on reporters and police as public opinion plummets. This is Rob Ford: The Game, a free platformer. It’s delightful.

As the amount of crack clouds, marijuana leaves, and alcohol bottles you collect increases, you acquire party points. But if you can’t avoid the police and reporters in time, you lose points. The screen flashes with an image of Ford: you have been impeached. Unfortunately, the impeachment ending appears to be the most unrealistic part of the game; Ford’s drunken antics made news once again this past weekend, but he is continuing on with his re-election campaign with no impeachment charges on the horizon.

The developers, two roommates from the University of Waterloo, are going to enter the ingenious game into the Spring 2014 HackNY competition. They used an HTML5 game engine to create the simple, charming game, and told Daily Dot that all the audio comes from actual Rob Ford clips. “We wanted to build something fun that makes a point, and we think we accomplished just that,” they told us.