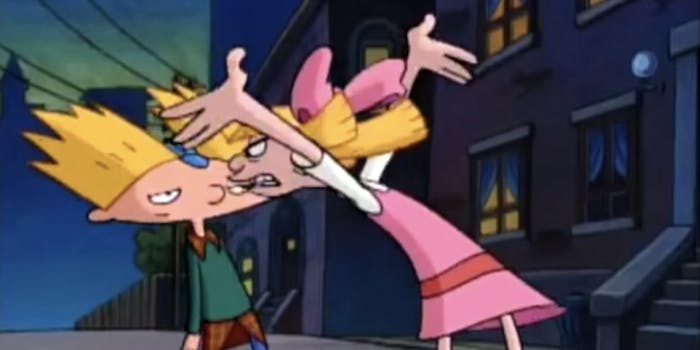 These roasts of ’90s cartoons note how weirdly troubling ‘Hey Arnold!’ was

Berleezy points out the odd surrealism of Nicktoons.

Nothing whets the nostalgia of a ‘90s kid more than Nicktoons.

And how! Nicktoons defined an era of modern cartoon classics, starting with Doug, Rugrats, and Ren & Stimpy, then dialed in their game with Spongebob Squarepants, Hey Arnold!, and The Fairly OddParents.

But has anybody ever thought to remove their rosy-colored glasses of nostalgia and look a little bit closer at the madness being broadcast to America’s youth through these shows? To date, only one person has been bold enough to look past the quick cuts: a YouTuber named Berleezy.

Berleezy, the online alias of Cal State Fullerton fourth-year student Berlin Andre Edmond, Jr., produced a point-by-point breakdown of the Hey Arnold! intro, revealing that the segment is much more akin to the disturbing surrealism of Luis Buñuel. Hey Arnold! exists in a world without logic, without physics.

Originally produced in 2013, Edmond recut “Hey Arnold: Exposed,” to a 30-second clip that he posted to Twitter on Nov. 28. It has since gone viral.

“While I was waiting for my girlfriend to finish getting ready, I sliced up that old video just for the heck of it and threw it on [Twitter],” Edmond told the Daily Dot via email. “Next thing I knew, I woke up with 8k retweets.”

Edmond grew up with siblings who challenged each other to “think outside the box in the funniest way possible,” he said. When he produced the first Hey Arnold! video in 2013, he just did so out of boredom. “I analyze like that in real life.”

WTF screams punctuate the videos, as Edmond questions the rationality of the characters’ decisions; how they got from point A to point C without hitting B.

“How did he get the flashlight?” Edmond asks as Brainy magically steals a flashlight from Arnold’s hand during the Hey Arnold! intro.

“Take him to jail!” he exclaims in his latest video, as the grandfather in Rugrats sleeps while five babies tear up the house.

Releasing a video is such a shot in the dark, there’s really no guarantee your work will go viral. But Edmond tries to keep his approach to comedy as relatable as possible, noting that, perhaps, that’s the key to virality.

“I feel like ‘online comedy’ [on Twitter, Vine, and Facebook] is so saturated right now. Everyone is doing it,” he said. “I think the reason people f*ck with me is because my content is something we all relate to as millennials: childhood cartoons.”

He continued: “I am hitting them in the feels. I think my delivery helps, too.”