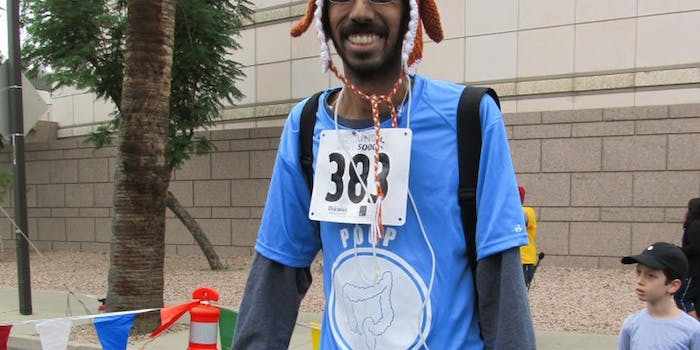 Guha started the "Poop Strong" campaign to fight colon cancer, and convinced an insurance CEO to cover the entire cost of his cancer treatment.

Arijit Guha, an outspoken activist who took on the Transportation Security Administration for banning him for a flight because of a shirt he was wearing and battled insurance company Aetna when they refused to cover his colon cancer treatments, died Saturday. He was 31.

“He lived his life, even up to the very end, with warmth, humor, and positivity, and his boundless capacity for hope and love gives me strength,” Guha’s wife Heather wrote on Facebook. “He will be greatly missed, but I know that his beauty, goodness, and desire to make the world a better place will continue on through all of the people and lives he has touched.”

In the era of taser-wielding Internet heroes, all Guha needed was his words and an Internet connection to make real change. Guha made international news in July after Aetna told him that his surgeries and chemotherapy had exhausted the $300,000 limit of his health plan through Arizona State University, where he was a sustainability graduate student. Guha started the website Poop Strong—a colon-themed takeoff of Lance Armstrong’s famous LiveStrong foundation—to sell bracelets and T-shirts to raise money for his procedures. Guha also began tweeting about his predicament with the insurance company and ultimately caught the attention of Aetna CEO Mark T. Bertolini.

“Bertolini directed Aetna to cover the full extent of bills I accrued while uninsured ($118,000 and counting),” Guha wrote on his Poop Strong blog on July 31.

About three weeks later, Guha and Heather were preparing to board a flight at the Buffalo-Niagara Airport when a T-shirt designed by Boing Boing’s Cory Doctorow got him into trouble.

The shirt, which featured the phrase “BOMBS ZOMG ZOMG TERRISTS,” was deemed offensive by the TSA, and Guha was told he could not board while wearing it. He agreed to change his shirt and go through additional security checks, but was still told he could not board. Niagara Frontier Transportation Authority transit police wanted to question him about why he did not agree to walk through the body scanner.

“In addition to having little tolerance for unnecessary and ineffective security procedures like the body scanner, I’m also not particularly fond of exposing my boy to additional avoidable sources or radiation and, more importantly, any scan would guarantee that I receive a follow-up full-body pat-down,” Guha wrote in a blog post explaining the ordeal.

“Because I have both an implanted port through which I receive my chemotherapy infusion and, having lost nearly a foot of my sigmoid colon, I have a colostomy. A bag that full of some sort of foreign matter strapped to the abdomen of a passenger would raise eyebrows among those analyzing the image of me walking through a scanner.”

Guha and his wife were ultimately booked on a flight the next day.

A Facebook memorial page for Guha has already received 1,093 likes and dozens of comments.