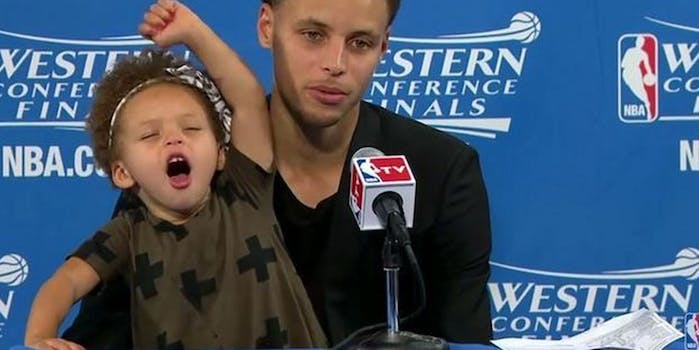 A lot of people love to be dicks about the divisive world of sport, building identities around their strong opinions about professional teams and athletes who will likely never know the dicks exist. Or never would have known, before Twitter arrived and took all the friction and effort out of harassing players and their families.

It should surprise and appall us that after popular basketball man Steph Curry lost the Big Game on Sunday, trolls went after his adorable 3-year-old daughter Riley on Twitter. But this is 2016, so it’s entirely expected that grown men will take time out of their days to type insults at someone who’s probably too young to read.

There’s a twist, though: the Riley Curry on Twitter isn’t the toddler daughter of an NBA star. He’s a 29-year-old former football player from Tennessee who happens to have the same name.

This is Riley Curry:

And this is the other Riley Curry: The big man says he’s saddened by the abuse that’s being directed at the cute child.

He’s not wrong. Let’s take a quick dip into the poisoned river that is Curry’s mentions.

Yo @RileyCurry there is no Santa Claus

Very nice things to say to a 3-year-old because you’re mad about how many times and from what distance her father threw a ball into a hole. There may have been worse, too—it appears some of the people attacking toddler-Riley had second thoughts after man-Riley spoke up about it, and accordingly deleted their tweets.

“It’s been stuff like, ‘You should tell your parents to kill themselves,’” he told the Tennessean. “All this stuff that is just awful. The problem isn’t about me being bothered or offended or getting my feelings hurt. It’s the fact that on social media, people say whatever they want without there being any accountability or consequences. People say these awful things potentially to a 3-year-old little girl. It’s alarming and kind of sad.”

At least he’s still able to have a little fun with his Twitter account, making light of all the trolls: