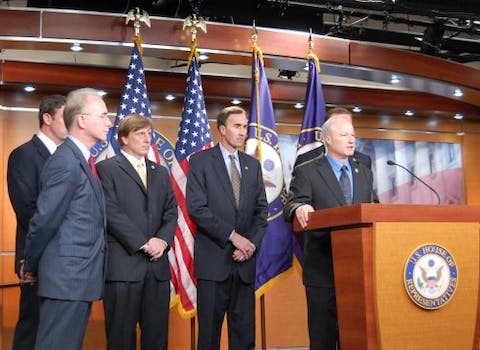 The Republican Study Committee (RSC), an enormously influential caucus of House Republicans, briefly introduced a memo on sweeping copyright reform that would be an Internet freedom activist’s dream come true. And just as swiftly, less than 24 hours later, the group retracted the document.

It’s no secret that powerful institutions that want the U.S. to maximize its copyright laws, like the movie and music industries, are often at odds with what most consider Internet freedom. After all, it was those industries that pushed for the Stop Online Piracy and Protect IP Acts (SOPA and PIPA) in January, bills that could have made it easy for any website that accepts user-generated content to be shut down.

And with every international treaty that concerns Internet activists, from the Anti-Counterfeiting Trade Agreement (ACTA) in Europe this summer to the ongoing Trans-Pacific Partnership (TPP) negotiations, activists’ biggest concerns are with copyright maximalists.

So it was surprising when the RSC, which at 82 members represents almost 38 percent of the House’s 435 representatives, temporarily indicated it wanted substantial copyright reform on Friday.

What’s wrong with current U.S. laws? According to the RSC, it has three major problems:

1. The Constitution’s clause on Copyright and patents states [in modern language] that the purpose is to lead maximum productivity and innovation.

Most legislative discussions on this topic, particularly during the extension of the copyright term, are not premised upon what is in the public good or what will promote the most productivity and innovation, but rather what the content creators “deserve” or are “entitled to” by virtue of their creation.”

2. Copyright violates nearly every tenet of laissez faire capitalism. Under the current system of copyright, producers of content are entitled to a guaranteed, government instituted, government subsidized content-monopoly.

The memo also makes note of a jarring effect of the Digital Millenium Copyright Act (DMCA), the 1998 law that still guides how companies usually take down their own copyrighted material when they see it being unlawfully spread on the Internet. Companies can (and do) send huge numbers of DMCA notices to stop people from sharing such material. But while there’s an appeals process for users who insist they didn’t do anything illegal, there’s no punishment if you’re one of the very many companies that unfairly take down content that doesn’t even belong to them. This lack of accountability leads to what the RSC terms “de facto censorship.”

Jarringly, the RSC removed the memo down from its webpage on Saturday, though it’s still visible at archive.org. Paul Teller, the RSC’s executive director, send out an email explanation that the memo “was published without adequate review within the RS,” but offered no details as to how such comprehensive reform could be drafted and published on the site without review.

Some, however, are keeping a candle burning that the memo could be revived in Congress. Darrell Issa, a member of the RSC and the only Republican in Congress to sign the Declaration of Internet Freedom, tweeted a link to Techdirt coverage of the story, with the message “It’s time to start this #copyright reform conversation.” And the activist group Public Knowledge has already started a campaign for Americans to call their representatives in Congress, especially those in the RSC, to bring back copyright reform.