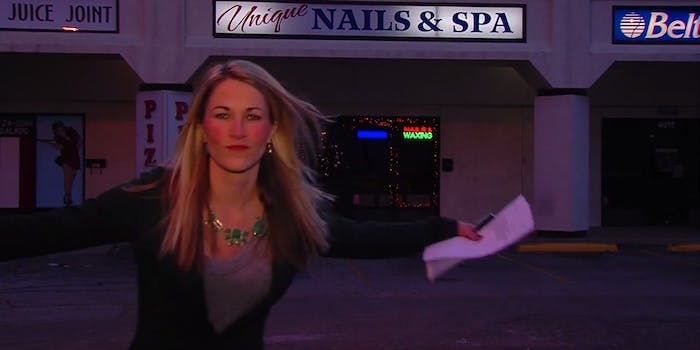 Tongue-twisting hip-hop hit 'Alphabet Aerobics' is a tough one to rap. She makes it look easy.

TV reporters perform all sorts of quirky rituals to loosen up and prepare for on-air shots, but this reporter’s rapping warm-up may be the coolest one yet.

An NBC 9 News reporter prepped for her live shot by rapping Blackalicious’s “Alphabet Aerobics” in full. Her delivery needs a little work, but she’s got flow, and she nailed the tongue-twisting lyrics perfectly.

This isn’t the first time Blackalicious has been in the news recently. In October, Daniel Radcliffe proclaimed his love for the group on The Tonight Show—and he too performed “Alphabet Aerobics.” Of course, he was praised endlessly for it, because he’s Daniel Radcliffe.

The gauntlet’s been thrown down. Who will be the next news personality to display his or her rapping chops and mastery of complex rhyme schemes? Matt Lauer, we’re looking at you.