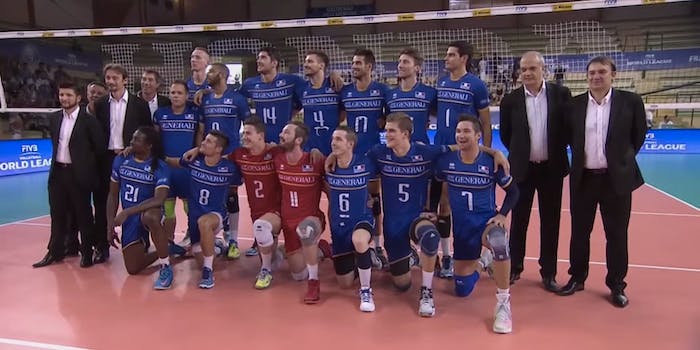 Can you spot him?

While some young pranksters’ exploits of inserting themselves into the picture have gone awry, veteran Rémi Gaillard has proven that he’s still got it.

France just won its first World League title in volleyball Sunday, and the team gathered on the court to take the victory photo. But Gaillard, who’s been pulling off pranks like this for more than a decade, managed to sneak onto the court from the top of the stands to get his moment while everyone around him is none the wiser.

He’s wearing a near-replica of the team’s uniform (although he’s missing a number on his jersey) and is the only one standing out when the photo is taken. But at that moment, he’s just another member of the team.

Gaillard has done this before. Back in 2002 he snuck onto the French men’s volleyball team during a match with Germany, and once got onto a soccer field with a fake uniform, fooling players and the fans alike.