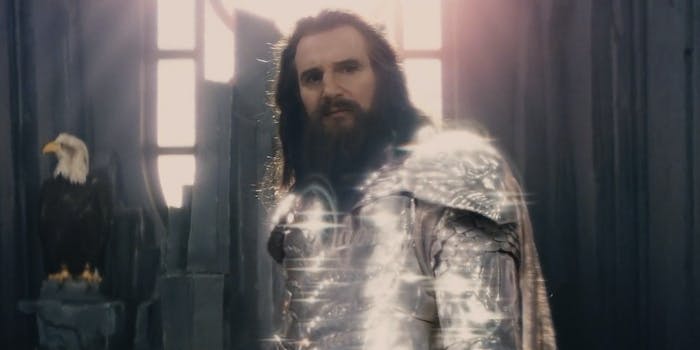 Screengrab via Clash of the Titans

'Release the Kraken' was a catchphrase from an all-time terrible movie. No wonder it became a meme almost instantly.

How is a meme born?

Sometimes it’s not any more complicated than a goofy line-reading in a bad movie. That’s all it took for lines like “Oh hai, Mark!” and “You’re killing me, Lisa!” from The Room to enter the online lexicon, for example.

The 2010 remake of Clash of the Titans may not be as infamous as Tommy Wiseau’s “disaster-piece,” but it did feature one line to achieve internet immortality: “Release the Kraken!”

When Warner Bros. decided to reboot the 1981 fantasy/adventure film, The Clash of the Titans, based on the Greek myth of Perseus, the studio was likely hoping audiences would find the story memorable and exciting. But probably not like this.

The line is shouted by Zeus, played by Liam Neeson, in a dramatic moment in which the Greek god is ordering his men to unleash the legendary squid monster. It was featured heavily in the advertisements leading up to the release of the film, and the line stuck in people’s minds.

Mostly, though, we’d venture it’s simply because “Kraken” is a funny word.

A month before the film released in theaters, Urlesque posted an article making fun of Neeson’s line. The humor site posted photo mash-ups of Neeson from the trailer with parody images, then encouraged readers to create their own. It was here that the meme version of “RELEASE THE KRAKEN!” truly took shape.

Shortly after the article was posted, the first entry for “Release the Kraken” on Urban Dictionary surfaced, with user ashraptor defining the phrase as “to pwn or to kick the ass of whomever you’re releasing the kraken on.”

By the time the film was finally released in April 2010, the phrase had become ubiquitous. Outlets like Vulture, MTV, Geekosystem, Mediate and others covered the meme’s growing popularity and, in doing so, fanned the flames even further. By the end of the year, Time magazine included “The Kraken” as one of the Top 10 Buzzwords of the Year.

The film, on the other hand, was widely panned, especially the poor implementation of its 3D effects. Peter Travers of Rolling Stone awarded the film 1 star out of 4, stating, “[T]he film is a sham, with good actors going for the paycheck and using beards and heavy makeup to hide their shame.” Of course, that’s exactly why the internet loved Liam Neeson’s line delivery.

We’re now nearly a decade since Clash of the Titans came and went, and though the film won’t be inspiring fan conventions anytime soon, there doesn’t seem to be any shortage of internet denizens calling for the Kraken to be released.

Apparently, now is just as good a time as any to release the Kracken.