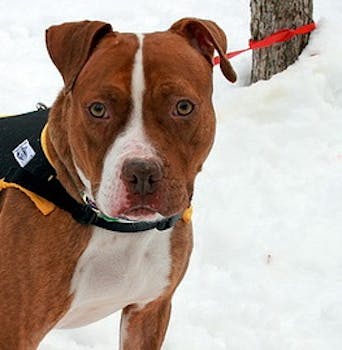 Police shut down Facebook page after outrage over dog shooting

The police force in Regina, Saskatchewan, temporarily deleted its Facebook page due to public outrage after an officer shot and killed a dog.

The police force in Regina, Saskatchewan, temporarily deleted its Facebook page due to public outrage after an officer shot and killed a dog.

The page was flooded with hateful comments and posts after the shooting, which happened as police pursued an assault suspect. The pit bull reportedly attacked a police dog, and the officer who pulled the trigger worried about both his safety and that of another officer, police said.

In a news release, the force claimed the incident happened quickly and it wasn’t immediately clear the dog was on a chain, albeit with access to much of the owner’s yard.

“All I know is what they done is wrong and I can’t let it rest,” the dog’s owner, Peter Cote told CBC. “Someone don’t have the right to come in your yard and murder a family member.” He claimed neither the police dog nor the officers were harmed, and suggested he would have been able to restrain his dog. He plans to file a complaint.

Following the incident, the force received a number of complaints on its Facebook page. The officers involved were threatened, too.

The Regina Police Association, the union representing 540 officers and civilian members, said it hoped the force would alter its Facebook policy.

“We’re not saying to shut down Facebook. We’re not saying that the public can’t comment, question, criticize and critique, but there was a comment posted on there on this weekend that said, ‘the only good cop is a dead cop,”’ union president Evan Bray said Monday, according to the Canadian Press.

“My question is, does that serve any purpose? Is that open and honest and good feedback from the community or is that someone wanting to grandstand and make something that is borderline criminal?”

The police service said Monday it would limit the number of times one person is able to post on the page, to help it better moderate the comments.

However, the department’s Facebook page disappeared later in the day. Before that, police disabled public posting on the page’s timeline due to persistent “profanity and hate speech, as well as posts inciting violence” despite requests for those to end. Even those who shared “their opinions respectfully” were in the crosshairs.

The force added that users were entitled to express opinions, though it did not “monitor this page 24/7” and was unable to “ensure that it’s a page safe for our diverse community of visitors.”