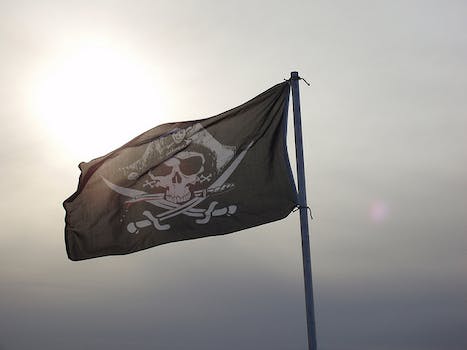 The new Copyright Alert System flies in the face of one of the most important tenets of American justice.

Big names in various industries have spent years trying to come up with an effective system to reduce online piracy. Yesterday morning, those big names launched what they think will be do just that: the Copyright Alert System.

The Copyright Alert System (CAS) has been devised at the hands of the most powerful movie and music industry companies and the mega Internet service providers. And in the end, that’s why it is an ineffective solution. The CAS is rife with accountability concerns. Yes, online piracy is a serious problem that needs a real solution—but one that flies in the face of the most basic tenets of American justice? That we don’t need.

The CAS is an effort made by the joining of forces between the largest Internet service providers in the US and the powers that be in the movie and music industries in order to deter the copyright infringement that is detrimental those industries. In the Copyright Alert System, identified copyright offenders receive a series of alerts that they are engaged in illegal activity. After the sixth alert, Internet services would be slowed to a crawl.

The six strikes system involves the Internet service provider delivering to the user warning emails, obligatory online education, and acknowledgement of receipt of warnings. The ultimate punishment can range from temporary service suspension to throttled Internet speed for 2-3 days or a $35 arbitration session. In arbitration sessions, the consumer only gets a refund for the cost of the session if found innocent. This range of repercussions changes significantly from provider to provider.

Will these warnings truly deter those who are pirating materials on a large scale? And more importantly, how are “pirates” determined? In my opinion, the CAS will do little to nothing to actually deter or punish large scale pirates—e.g., people who make massive amounts of copyrighted material available for free. What is a far more realistic scenario is that many innocent people will be wrongly punished.

The CAS leaves much too much room for error and for the false “convictions” of innocent individuals. Those who are actually pirating in large volumes will quickly adapt to the identification methods used by ISPs in order to avoid detection; that’s a given. Even more concerning is that we have proposed here an online justice system with no real oversight of the program. Who will truly decide which individuals to pursue? Who decides what s a severe offense, what is unjust, what pirates are, what is an accidental misuse? 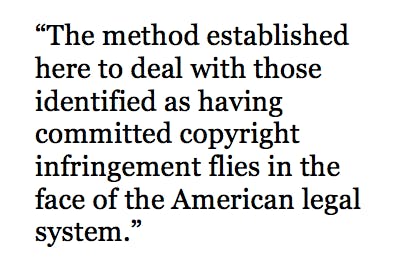 The method established here to deal with those identified as having committed copyright infringement flies in the face of the American legal system. First of all, even that very method for identification has not been fully disclosed. It seems that the accusation stems from the copyright holder, although there doesn’t seem to be much, or any due process in assignment of guilt—based on the reasoning that these are “warnings.” When a customer is deemed (by this mysterious method) to have committed copyright infringement, the immediate assumption is guilt without the opportunity for defense of the allegation, until the very late stages of the “investigation.” In most cases, the CAS offers no course of action to defend accusation until a punishment has already been handed out. This is a major problem, to say the least. Creating a system that runs directly contrary to how the US legal system is supposed to operate—on the assumption of innocence until proven guilty—is very disturbing. Once we start accepting these kinds of repercussions online, where else will they appear?

Can someone say conflict of interest?

In theory, the CAS calls for an “independent reviewer” to be the judge and jury deciding on the guilt of supposed online pirates. OK, sounds reasonable at first glance. But who is this person, and where do we find them? What unbiased body or which individual will fill this role?

This is one of the most concerning aspects of the CAS, and an indication of the lack of effort CAS founders are putting into keeping things unbiased. Their “independent expert”—Stroz Friedberg—who was supposed to ensure the fairness of CAS as a whole was, for example, a Washington lobbying firm. This same firm has previously received huge amounts of money from the Recording Industry of America (RIAA), the big largest proponent of the CAS. Can someone say conflict of interest?

The five big ISPs who have formed this alliance with the entertainment industry big names, include AT&T, Cablevision, Comcast, Time Warner, and Verizon. These companies represent the majority of Internet users in the United States. So why would they agree to a collaboration that is so user-unfriendly? It appears that big business is sticking together on this one.

The Copyright Alert System is a recipe for disaster. It is not only an ineffective method of combating online piracy—it has multiple issues concerning the overseeing of the whole program which run as deep as our presumption of innocence, a pillar of American culture and morality. Yes, there should be a system which more proactively combats and deters online piracy. Every ISP provider knows this. But the CAS isn’t it. Big five? We need to stay innocent until proven guilty.

Melissa Reed is the CMO and Co-Founder of Zing!Broadband, a small wireless internet service provider for rural areas. Melissa is also proponent for change in US regulatory policy for ISPs.

Photo by Serfs UP | Roger Sayles/Flickr