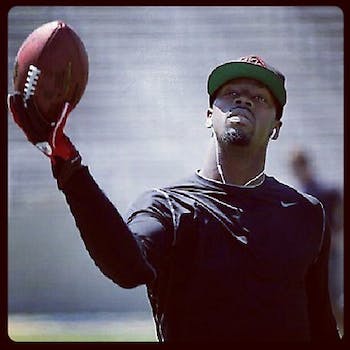 The wide receiver was hit with an unsportsmanlike conduct penalty that many fans felt cost his team the game against the St. Louis Rams on Sunday.

Morgan received an unsportsmanlike conduct penalty during his team’s game against St. Louis Rams on Sunday, and the Redskins subsequently lost the clash.

Redskins fans were none too pleased about the call, and some directed violent threats towards Morgan. One threatened to “kill him in your sleep,” while another wrote, “I hope someone throws a football at ur firstborn child.” Twitter users also encouraged him to jump off St. Louis’ Gateway Arch.

Morgan, who tweets using the handle @FeetzMorgan202, chose not to pay too much attention to those tweets.

“I heard everything, especially when they got you on Twitter and they start sending the death threats and wishing bad on your family and your first born and things like that, you see it all, you hear it all,” Morgan he told the Washington Times Wednesday. “You don’t got no choice but to see it all and hear it all. But you never let it get to you, especially me being from D.C.”

Despite the threats, Morgan said he won’t stop interacting with his more than 184,000 followers. Instead, he plans to use those messages, none of which he replied to, as motivation.

“You’re supposed to respond by your actions, and that’s what I’m going to do,” he claimed, adding that he isn’t scared by anything.

If previous cases are anything to go by, those who sent the threats could face arrest and imprisonment.