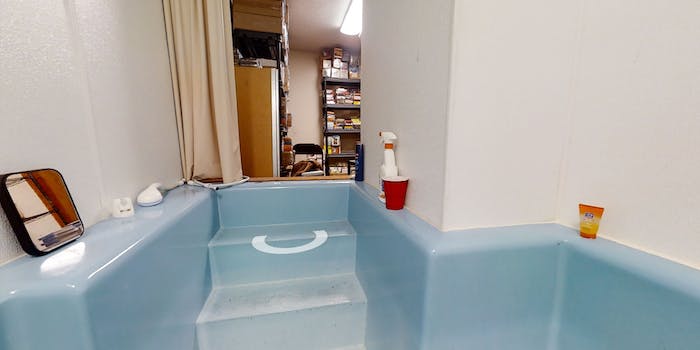 Can you make it through a 3D tour of this cursed Louisville home?

Finding the bathtub at 8800 Blue Lick Rd. has become a challenge.

A listing for a Louisville, Kentucky, home has sent the internet on a mission into chaos.

The listing is for a three-bedroom, four-bath home, and having more bathrooms than bedrooms is already somewhat cursed. But for the truly cursed experience, you must tour the home via 3D view. Writer Jenny Jaffe posted a tweet about the house on Monday, stating that she found it “in a Facebook group” and that the poster urged people to “try to find the bathtub.”

The description states: “Church, School, Daycare, Home business this home has been it all,” which explains why there is an exit sign in what appears to be the kitchen. “The pictures do not tell the full story,” the listing adds. “All information provided are only about the first building.”

Scrolling through sites like Redfin and Zillow is a comfort activity for many people, especially right now. But explorers turned it into a challenge or a video game. Early reviews of 8800 Blue Lick Rd. call it “one of the most mind-altering and immersive horror experiences ever” and a “spatial enigma.”

There are now speedruns of this cluttered, chaotic space, all with the goal of finding the bathtub.

The cursed vibe might not just be the staging: In 2014, authorities arrested a man named Troy Curtis and charged him with engaging in organized crime, after a four-year investigation. The home had once been the Bonaventure Boulevard Church of Christ, but after the church moved out, residents of the neighborhood said the home saw much more traffic, especially at night.

The home was filled with thousands of items of stolen property, which Curtis was allegedly selling. He told WLKY in 2014 that he ran an online business. Troy and his son plead not guilty in December 2014. It’s not clear if the items currently in the home are leftovers from that operation or if they come with the house. There are shelves of Girls Gone Wild DVDs just before you get to the cursed tub.

A shooting took place in the 8800 block of Blue Lick Rd. earlier this month, though it’s not clear if the victim or suspect was living in the house. What has this cat seen?