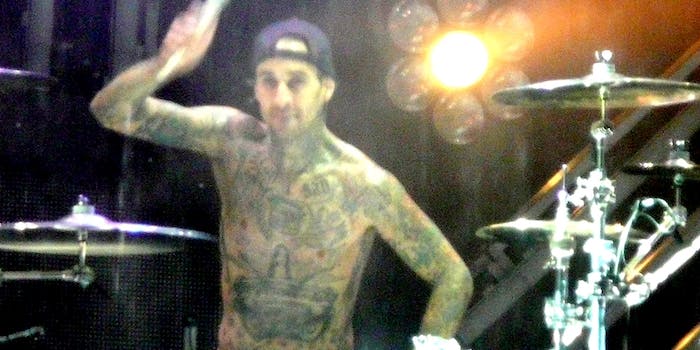 Redditors hook up a cancer-stricken bro with Travis Barker

A man dying of pancreatic cancer lived long enough to see one last wish granted, thanks to Reddit.

The story begins on the r/casualIAMA subreddit. Unlike its celebrity- and politician-filled default counterpart, r/casualIAMA invites anyone at all to host an AMA session. AMA hosts do not need to have particularly interesting lives or jobs. In fact, almost every day, multiple AMA sessions are held by redditors whose sole claim to fame is their current state of drunkenness or boredom.

Redditor Joseph Parker, using the throwaway account anon7715, accessed r/casualIAMA on May 26 and posted his story.

“I have Stage IV pancreatic cancer. I’m in a hospice and am going to die. Ask me anything!” he wrote.

Within moments, fellow redditors were filling the thread with their sympathies and questions. One exchange in particular stood out and set into motion a chain of events that would once again showcase what happens when redditors unite together.

“If one miracle could happen before you passed, what would you want?” redditor MrIndianTeem asked.

Parker replied, “To have [Blink 182 members] Tom DeLonge or Mark Hoppus or Travis Barker speak to me, whether through twitter or whatever it may be.”

“Just sent them all a tweet. Hopefully they’ll see it!” MrIndianTeem said.

“My stepfather used to be friends with Mark. Let me see in the morning if he still has any contact with him and if he can get him to this thread. I really don’t know, so I don’t want to speak too soon, but I will try my best,” redditor ryaneff offered.

Mere hours after the AMA session began, Travis Barker himself sent out a tweet.

@pancreaticstg4 Sending you love and prayers. If i can do anything for you please let me know

Parker replied to the tweet with a mixture of gratitude and skepticism.

@travisbarker Can’t believe you tweeted me, bro.. No words.

Barker assured the patient that he was indeed the one sending out the tweets.

@pancreaticstg4 Yes it’s me. DM me anything i might be able to do to make your day. Be strong my brotha

Needless to say, Parker was overcome with emotion following the exchange.

“You guys did it… I’m tearing up right now, folks,” he wrote.

Parker’s story is far from the first time the Reddit community has helped a terminally ill redditor. In December 2012, subscribers to r/startrek helped a dying fan of the series by urging director J.J. Abrams to share an advance screening of Star Trek Into Darkness. In March 2012, redditors helped a newly hired admin fight leukemia.