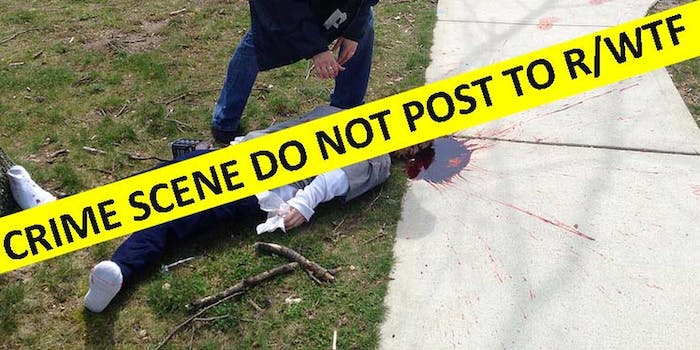 If you’re a fan of gore for gore’s sake, one subreddit doesn’t want you: r/WTF.

On May 22, r/WTF moderator wtf_mod broke the news to the default subreddit’s 3.2 million subscribers in a post simply titled “No more gore!“

“Our main reasoning for removing gore from r/WTF is that in most cases it is just not WTF,” wtf_mod wrote in the post. “We are trying to move away from this subreddit making you think ‘Eww, WTF, that’s disgusting’ and instead make you think ‘What the actual fuck.'”

wtf_mod suggested such subreddits as r/gore and r/MorbidReality as alternatives for gore aficionados. It was stated that gory content would still be accepted only if there was a WTF element to it.

“For example, if you fall and break your leg, it would be expected that your leg would be broken. A picture of this broken leg (no matter how much bone you may be able to see) is entirely expected of the situation and is not ‘WTF’ in nature. If a clown showed up and started humping your leg afterwards and you managed to snap a picture, then please feel free to post that. That’s pretty ‘WTF,'” wtf_mod explained.

Reaction to the newest stipulation has been mixed.

“This is a great change. Most if not all gore posts are not unique in any way, and not WTF. They just clutter the subreddit and take away time for posts that are truly WTF and interesting, which this subreddit receives quite a lot of. Glad to see the change,” redditor NotaMethAddict commented.

“Sorry, but this subreddit just lost all my respect,” redditor kevinmaximus said.

“If anybody is willing to break their leg, I am willing to dress up like a clown and hump it,” redditor Nero_A offered.

So take that photo of your pus-oozing open wound elsewhere. Unless, of course, there is a clown, robot, or washed-up 1980s sitcom star humping it.


The Daily Dot’s subreddit, r/dailydot, highlights the most interesting or important discussions from around the social news site every day.