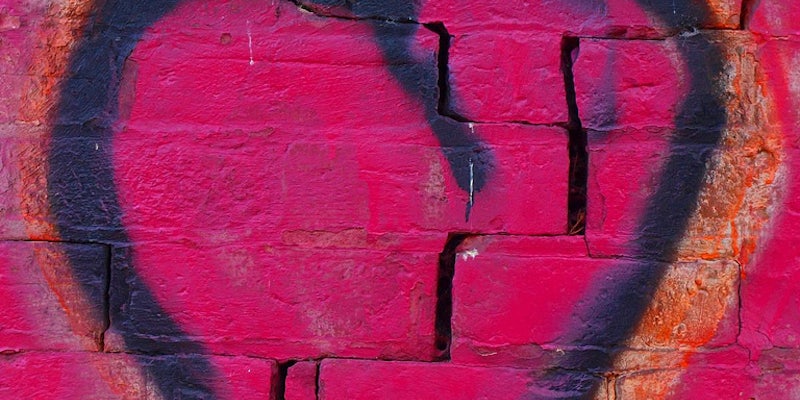 Valentine’s Day isn’t all about cards, candy, and flower-delivery charges. Sometimes it can also involve urine-soaked sheets and divorce papers.

As February 14 rolls around each year, inevitably some variation of the question “What was your worst Valentine’s Day like?” is posted to Reddit. We sifted through responses, brushing aside the many answers of “All of them” and finding truly memorable gems.

In high school I went out for Valentine’s day with my then-boyfriend. We had been dating for almost a year, but this was the first time we ever really went anywhere (typical high school relationship I guess). So we got dinner, and right before we left we exchanged presents. I was going to a fine arts school at this point so I had made him something in class that I was really proud of and hid a gift card to a store he loved inside. He gave me one of those $5 stuffed animals from walgreens and just kind of threw it at me, with no card or anything. After that we’re walking to the car, he’s taking up the entire sidewalk almost, so I’m trying to walk through the mushy grass (it had been raining) in heels. I fall in the mud, practically ruin my dress, and he laughs at me. The worst part is that he didn’t even take the present I worked so hard to make for him – he “accidentally” left it at my house when he dropped me off. I still have it, too. :(

Last year. I had to take a cab to an abortion clinic, alone, because I did not want anyone to know. It was the worst day of my life.

I was with a girl who was absolutely in love with me, talking about marriage, pets, kids, etc. On our 3rd Vday, at dinner I looked at her and it hit me: I realized I had lost any feelings I had for her. Nice girl, cute, treated me great, would’ve made a fantastic wife…I just lost those feelings. Sucks to know it’s not your fault the way you feel, but to realize this poor soul is going to be crushed. It’s been 5 years and I still feel like shit for that.

I bought myself flowers because I knew my BF at the time wouldn’t do it. Instead of thinking “I should try not to be a douchebag all the time and maybe be a little more romantic,” he got mad at me for wanting flowers in the first place.

Became massively friend zoned while out to a dinner and a movie that put me out about $75 bucks.

So here I am, a 20 year old socially awkward swede with barely any experience with girls. However, for some strange reason yesterday (13th) I grew the balls to ask a girl out for valentines. Not only did she say yes, she ended up going home with me and spent the night. This is where the story begins. … See, some of you redditors believe you are socially awkward, allow me to laugh. The first time I share my bed with a girl, I end up dreaming about going to the bathroom to pee. “Whats this warm sensation?” I ask myself. “My waist is so warm!” Suddenly wake up from girl shouting and yelling.


…Oh god, I had PEED MY FUCKING BED. IM TWENTY YEARS OLD AND I JUST WET MY BED. Please allow me to die.

“My boyfriend at the time had made reservations for lunch at a nice restaurant, but never came to pick me up. Two hours later he calls me to let me know he simply got distracted trying to memorize Die Antwoord lyrics and that it wasn’t a big deal because he had a back up plan. He then proceeded to take me to the grimiest IHOP in town and then go see Avatar for the 4th time.”

I was really into this guy in high school, we had been on a few “dates” of sorts and made out a few times, nothing more than that. Our school sold roses as a fundraiser and they were delivered during first period on Valentine’s Day (or the Friday before if it was a weekend). This fateful Valentine’s Day I happened to have the flu, but I came to school anyway because I wanted my damn roses. My name gets called out by the person with the rosecart and I go up and get a few, all of them from my friends in friend-appropriate rose colors, except for one. One tiny red rose. I was so excited, I figured that he must have gotten me a red rose and written the message asking me to be his girlfriend, right?

Wrong. He wrote on the message that he was happy that I was such a great friend. He had the nerve to come over to my table at lunch that day and talk to me as if nothing happened, and I still thought that maybe he’d like me…

TL;DR: friend-zoned by a red rose.

I was 17. My boyfriend of a year broke up with me over the phone while I was visiting my dad in another city. An hour later, my mother called sobbing because she’d had a knock-down drag-out fight with her boyfriend. My stepmom had been verbally abused and then called into work by her heinous boss (it was a Saturday).

My poor shellshocked father, dealing with three crying women, tried to make it better by taking my stepmom and I to a movie at the end of the day. My stepmom was really late getting out of work, so we missed the movie we wanted to see and settled for something none of us really cared about, just so we’d have something to do.

After the movie we went to dinner. My dad dropped my stepmom and I off in front of the restaurant and then pulled around the corner to park and was hit by an oncoming car. He was fine, but the car was totalled.