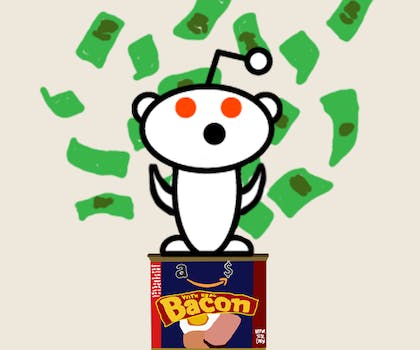 Redditor redLP published a detailed post that claims the 37,000-strong r/thebestofamazon is a spamming front controlled by one person operating under several aliases.

For spammers, Reddit is the Holy Grail. If you can crack the tremendously popular social news site, you can potentially rake in cash from the site’s millions of monthly visitors. But that’s a pretty big “if.”

Redditors pride themselves in keeping the site free of spam. Just ask The Atlantic and Businessweek, two publications that suffered the consequences of spamming Reddit.

But now, someone has done the unthinkable. They’ve successfully been spammed Reddit for months without anyone making a fuss. That is, until now.

Last Tuesday, redditor redLP published a detailed post that claims the 37,000-strong r/thebestofamazon is a spamming front controlled by one person operating under several aliases. The post also accused the moderator of using the subreddit to spam for profit, not an outrageous claim given that it contains nothing but Amazon affiliate links.

Amazon pays a referral fee to members of its affiliate program any time a link to a specific product results in purchase. The company keeps track of these links by inserting an affiliate tag at the end of each product URL. These tags are unique to specific program members.

It took redLP three weeks to compile a spreadsheet that cross-referenced r/thebestofamazon submitters and their corresponding affiliate tags. He eventually came to the conclusion that more than 80 Reddit accounts had submitted links with the same affiliate tags, which led him to believe that they were all controlled by the same person.

RedLP then approached coconutwaters, one of the moderators of r/thebestofamazon, and demanded that the subreddit become available to anyone who wanted to submit links. When that didn’t work, the user turned to the site’s administrators, then broadcast his findings on the social news site itself. He first turned to the r/YouShouldKnow, and then r/SubredditDrama and r/TheoryOfReddit, three communities dedicated mostly to Reddit-specific happenings. All of the posts were deleted for apparent rule violations.

But redLP raised enough of a fuss that coconutwaters felt compelled to respond publicly. In a comment—now deleted but screengrabbed by this reporter—coconutwaters blasts redLP for being petty. Far more interesting, however, was coconutwaters’s admittance of maintaining multiple alternate accounts.

“Yes, I do own about 10+ accounts and use them all to post,” coconutwaters wrote. “When we started the subreddit, we knew that if we posted everything under one or two accounts, it would not look good and no one would subscribe.

“So because of this, we made a bunch of alternate accounts which we still use today to post items. At the same time we do allow other posts all the time, although the majority is from us.”

In short, redLP was right all along. But you won’t see him gloating on Reddit. As of Thursday morning, the user account has been deleted. According to Reddit Community Outreach Manager Alex Angel, redLP was kicked off the site for having multiple alternate accounts and upvoting his own content.

“What I had meant to say, and probably could have been a bit clearer in my original message to redLP,” Alex told the Daily Dot, “was that while there were alt accounts being used to submit content, there were also others users who were not alt accounts that were also submitting links to r/thebestofamazon.”

So why is coconutwaters still allowed to peddle his affiliate links while redLP gets the axe? Because the former never used his other alternate accounts to vote up his own content, the most serious of Reddit’s cardinal sins.

I asked Angel whether Reddit allowed its users to spam subreddits like r/thebestofamazon so long as they were upfront about it. The query went ignored throughout our exchanges.

Regardless of any wrongdoing, redLP did prove that spammers are exploiting Reddit for profit. He also showed that the site’s administrators not only did nothing to stop it but that they looked the other way.

Is Reddit still the last spam-free bastion of the Internet? Apparently not.