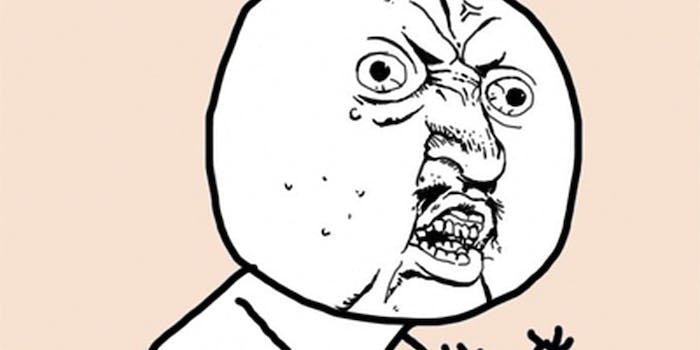 Reddit’s quarter-million-strong rage comics community, devoted to an elaborate and specific form of visual commentary, is going through more growing pains (and no, it’s not more moderator shenanigans).

The section’s moderators banned “unfunny” comics today, and are corralling anything long, serious, and short on laughs to a new section of the site called r/ragenovels.

“All content . . .  should have the express purpose of amusing readers,” wrote section moderator flabbergasted1 in the post announcing the change.

As with this week’s rule change in Reddit’s half-million strong question and answer section, it’s another instance of moderators of a major community putting their feet down in an attempt control an overwhelming amount of content on a site that grew 300 percent last year.

Rage comics were born on image board site 4chan, and have since migrated across the Internet. Reddit is now easily one of their largest homes on the Web, where the rage comic community is called r/fffffffuuuuuuuuuuuu, often abbreviated to F7U12.

Most of the original comics expressed rage at everyday frustration, in a maximum of four panels. But on Reddit, they’ve taken on a life of their own.

Last month, we wrote about how some users had began using the comics to simplify and understand events in the news.

And for a while now, others have used the comics to tell diary-like stories of their daily lives, sometimes using dozens of panels and walls of text. Those comics have enraged some rage comic purists, who’ve taken to calling these longer comics “rage novels” and “Live Journal” comics.

That’s why the moderators of F7U12 are pushing these so-called “serious” comics into their own section.

This kind of increased specialization is actually pretty common on Reddit, and often leads to big success. The rage comics section itself was born when redditors became tired of rage comics flooding the popular image section, r/pics.

So could r/ragenovels see similar success? Will these longer comics blossom the same way graphic novels did in the mid 1980s?

That’s to be determined. But if they don’t, you can bet on seeing someone rage about it. In comic form.