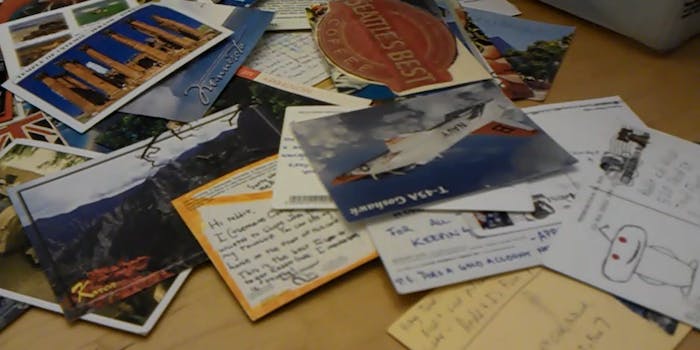 Redditors from all over the world send their postcards to the social news site's offices in San Francisco. We show you a few.

In a corner of social news site Reddit’s San Francisco office sits a mailbox filled with a veritable mountain of postcards.

Some are hand-made. Some are cheap cardboard cut-outs. Most are the mass-produced but endearing cards you’ll find at any tourist store. Many bear postmarks from exotic locales: Brazil, Egypt, and even Antarctica — 94 countries in total.

They’re mostly letters of love from Reddit’s million-strong user base. And starting today, the site’s embarking on a project to digitally catalog them for posterity.

Reddit General Manager Erik Martin told the Daily Dot he’s not quite sure how many cards they’ve received — his best guess is about 750. But they’ve been building up from a slow trickle since last July, when the company launched its Reddit Gold subscription plan and offered a free month of the service in exchange for a self-addressed postcard.

Earlier this month, the company hired a fine-arts graduate to handle the project, after posting a help-wanted ad on Reddit (most of Reddit’s hires come from within the community).

The new hire will make high-resolution scans of every card, then choose some of the most “creative or funny or weird” for a special Web-only presentation — “we want to show those off,” Martin said. The company hopes to have that project ready by the end of the year.

At the company’s old offices, which the team left in July, the postcards covered the walls like makeshift wallpaper. Martin and the rest of the Reddit team hope to do something more spectacular this time around (after the cards are scanned, of course)

When I visited the Reddit offices last week, the very first thing Martin and Reddit developer Max Goodman showed me were the postcards.

They’re clearly proud of these little cardboard remnants of another era—interesting, considering they work on a site built on pseudonymous digital conversations.

“There’s something about a physical object that someone’s taken the time to make, purchase, drawn on, then put in the mail—sometimes from halfway around the world,” Martin said.