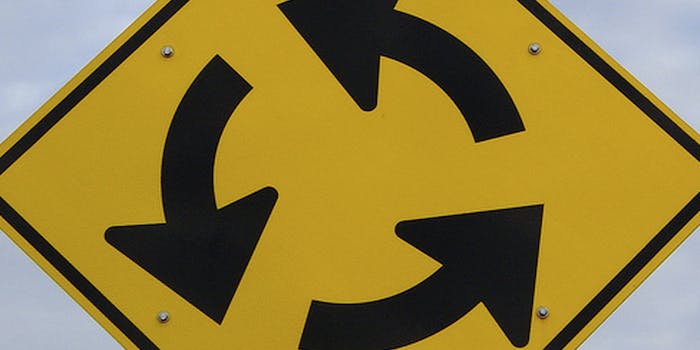 With effort, a tired joke becomes a movement on the social news site.

“Does anyone know WTF this thing is? The bottom part was sticky and it would move very slightly after I touched it.”

That’s how redditor pyroy introduced a photo of a tiny, multi-legged insect. The redditor placed the curiosity next to a dime, so viewers could gauge its size.

“Large dime=10 cents,” deadpanned quiky. “No idea why it was sticky or moving. I would use caution.”

Now, the game is afoot.

“Ah, the old Reddit switch-a-roo,” commented JPark19 in post that linked to an older thread. Just like in the aforementioned thread, a witty redditor feigns ignorance about which of the two subjects in an image is the more comment-worthy. Inception-like, the linked thread itself contains another switcharoo comment and link. And so on and on, ideally, to eternity.

Since July 2011, redditors have been actively contributing to “the old switcharoo.” Any time a redditor’s photo could possibly be taken ambiguously, somebody suggests the alternate viewing— no matter how tired the joke or how much of a stretch it might be.

The short-sighted reply is the first half of the joke: A female fan posting a photo she’s taken with Zach Braff invited one user to quip to the poster, “Dude Zach, that’s a girl.” A woman getting hit by a truck prompted a prankster to feign concern: “Is the truck okay??”

The second part of the joke takes much more dedication. Someone else has to come in and note this instance of the switcharoo. Each of these notations must link to the chronologically previous instance, to create an eternal “switcharoo train” of every time the joke has been uttered.

The Daily Dot talked to redditor PurpleSfinx, one of the joke’s most devout organizers. A 22-year-old from Melbourne who said his real name is Adam, PurpleSfinx created a subreddit to keep track of the joke, r/switcharoo, and made its first. Other volunteers took over from there.

“[I thought] it would be great to see just how long we could get the chain,” he said. “While I agree with the general idea that this should be an organic, natural meme and not to force it, it does require an element of structure.”

Adam shared one of his inspirations—redditor c3rb3r’s extensive mind map of all switcharoo instances from two months ago. Adam said he noticed the switcharoo links branching off in all directions. To improve redditors’ procrastinating experiences, Adam wanted to make the chain one long, continuous thing.

Adam also invited one other moderator to r/switcharoo—jun2san, who’s credited with creating the meme. According to the mind map, jun2san first started the trend on July 27, 2011, when he made a rage toon to prove how repetitive the feigned ignorance joke was. Now, he’s just as surprised as Adam about how popular the it’s gotten.

“I’m impressed now,” jun2san told an admirer. “I didn’t expect it to become as big as it is now.”

Adam said that while the old switcharoo effort isn’t the most productive use of redditors’ time, he can tell by the frequency of the meme that it’s entertaining hundreds.

“I mean, giving food to the hungry and saving lives is one thing,” he joked, “but nothing really compares to making a huge long chain of the same joke repeated thousands of times!”

Photo by The Tire Zoo