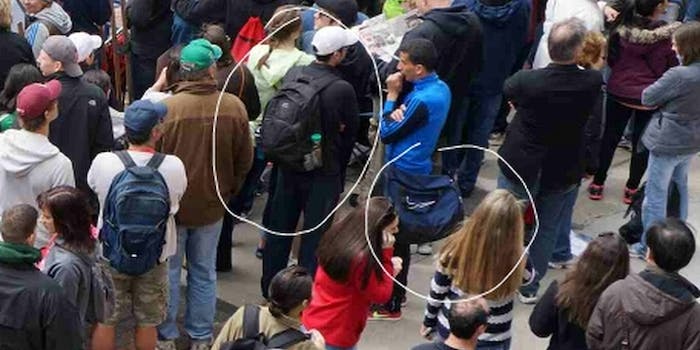 Leader of chaotic Reddit bomber manhunt lashes out at media

It’s all the media’s fault. That’s the message from the ringleader of a 3,000-strong team of Reddit amateur sleuths who labeled two men as terrorists and murderers behind the Boston Marathon bombing. 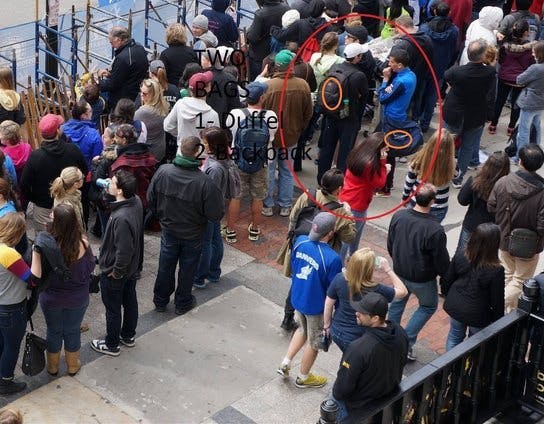 “Until the media got involved, none of the images were going anywhere but to the FBI,” bemoaned redditor oops777. The redditor, who told Buzzfeed he’s a 23-year-old professional poker player from England, created the subreddit r/findbostonbombers to serve as a crowdsourced digital forensics platform, where users pored over all the publicly available images of the bombings in an earnest but misguided attempt to help out the official investigation.

It didn’t take long for the amateur detectives to surface two favorite suspects, a pair of young men close to the place where the first bomb went off. One is wearing a blue tracksuit and carrying a blue Nike duffel bag, the other’s wearing a black fleece and a white baseball cap. He’s carrying a black backpack with a two bottles of water and what looks like Altoids mints in the side pockets. The bag has some resemblance to the one authorities say the bomber used, in the sense that it’s black and bulky.

The subreddit, which was growing rapidly yesterday, is a section on website with billions of pageviews every month. It’s not surprising it drew the media’s attention (most of which denounced it) or that it served as a launching pad for the photographs to propagate across the Internet. Nor is it a surprise that eventually the men in the photographs would learn they were at the center of a wild and poorly organized Internet manhunt.

Soon redditors were ready to declare the men innocent. Here’s what one redditor wrote in a new thread:

Blue track suit guy’s facebook info got out. I won’t post it but this guy is not the bomber. His latest facebook post shows him freaking out that he is on tv as the bomber. He said he was going to court to say he didnt do it. Also, he works at a running store which gives further credit to the theory about him having nice running shoes and just being there to spectate.

I go to high school with the kid in the blue tracksuit. I can assure you he is innocent. He’s a track star for our school and is the nicest kid i know. There’s no way he could pull something like this off. He’s practically a pacifist. He was in my soccer team last year so i know him pretty well.

Despite Reddit’s huge influence, the subreddit’s founder placed the blame for the wild accusations squarely on the media. “The two Males that the media have claimed the FBI are looking for are local guys and appear to be innocent,” he wrote. The media as a whole never really identified those two men as the culprits. CNN and other news outlets have quoted a law enforcement official who described two suspects in the case, one of whom was wearing a black backpack and a white hat turned backward (in the photos circulating on Reddit, the man’s hat is facing forward).

Oops777’s not entirely wrong to blame professional news outlets. Earlier today, the New York Post ran a front-page photo of the very same two men with the screaming caption “BAG MEN” under their clearly identifiable faces. The Post claimed police were circulating the photograph internally–which of course means nothing. Police are no doubt circulating hundreds if not thousands photographs internally right now.

There’s almost no point parsing the difference between “the media” and social media. All are platforms that broadcast to millions of people. If there’s one thing redditors should have learned after the past year, it’s that things you post to the Internet can have very real consequences (just ask Violentacrez).

Has Reddit learned its lesson? No. As of this morning, the subreddit’s members are still tossing up photographs of people at the marathon willy-nilly, wondering if they might be “suspects” in the case.  Do everyone a favor a favor just slow down for a second, redditors. You may not have to wait for long to see how wrong or right you were. Authorities told the Boston Globe they have clear footage of two suspects and will release their images later today.