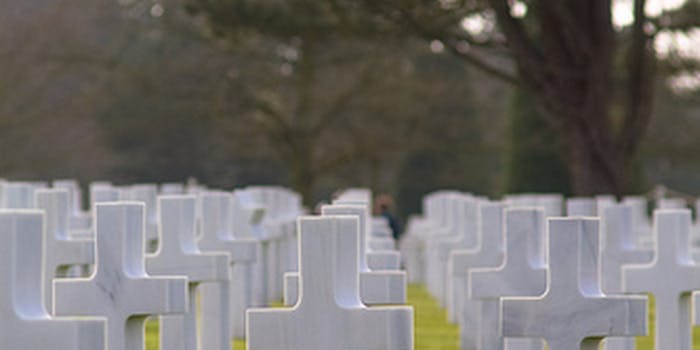 An estimated 7 million Facebook users pass away each year. How will those loses affect the social network in 20 years?

Judging from users of social news site Reddit, the world’s largest social media platform may be the first mass e-grave.

According to the CIA World Factbook, the world mortality rate sits at about 8.37 people per 1,000 people per year. That number gives us an estimate of how many Facebook users pass away each year: about 7 million. (It’s not a perfect estimate, as Facebook doesn’t accurately reflect the world’s population: China blocks its 1.3 billion people from accessing the site, for instance.)

If the site is still around in 20 years, will the social network be a digital graveyard? With 7 million people passing away each year, it likely already is.

The site’s profiles are, after all, digital homes—places where people detail the most intimate and mundane moments in their lives with words and photographs. Facebook’s Timeline Feature already attempts to build a narrative of your life from everything you’ve uploaded to the site.

Family members can already turn the pages of loved ones who’ve passed away into memorials. All they need to do is fill out a brief form and offer some identifying information.

For everyone else—likely the majority of Facebook users who pass away each year—their pages simply remain in limbo.

“I think Facebook has replaced the cemetery – as a place for people to go and remember,” Arlene Malinowski, who lost four friends over the past year, told the Daily Dot’s Dave Copeland in September. “When their birthdays pop up on my Facebook listings, I am allowed one moment from my crazy busy life to reflect, smile, hold my heart, pop onto the site to see who else has been there. It has become a modern day place to grieve”

“It would be really cool to have a section of facebook for dead ex-users. It would be cool, provided facebook stayed around long enough, for future generations to be able to go back and look at their great grandparents old pictures and such. It’s the modern photo album, facebook could just have all the profiles stored away in an ‘Attic’ of sorts” — dikley

“One of my (now deceased) friends has a frozen account. It’s creepy to see abandoned facebook pages of people you know are dead…the ones that except for a lack of personal updates, looks perfectly normal until you take a close look.” — ashole613

“My best friend and her daughter passed away last year. It’s been really nice to be able to still go to her Facebook page and look through her pictures or just leave a message on her wall or pm her. Even though I know that she will never see them, seeing people’s comments and posts has helped with the grieving.” — shaza420

“In a hundred years, the internet will hold literally millions of peoples’ life stories. From MySpace, to Facebook, to Twitter, to Tumbler, to everything that’s yet to come, you’ll be able to trace a person’s life from their birth to their death via the millions of postings they, and others, made on the internet.Every time I see my friends’ baby pictures, I just think that this person’s entire life will most likely be chronicled on the internet, and the historian in me is fascinated by this.” — Mootastic

“I plan to give my Facebook password to a trusted friend and have them post statuses ‘from beyond the grave’ every now and then once I pop off.” — sgst

“I have occasionally considered how my heart would be ripped out if I ever had to watch my father or mother pass away only to come home to see one last update or picture they had posted.I love you mom and dad.” — Seiesnalli