The creators of Journey to the Center of Hawkthorne deliver an update on the fan-made Community video game.

After eight months of work and the involvement of hundreds of redditors, a video game based on an episode of NBC sitcom Community shows no sign of slowing down.

Soon after “Digital Estate Planning”—an episode that found the Community cast trapped inside a 16-bit video game— aired last May, redditors swung into gear to create their own version of the game. The brainchild of Community fan and software engineer Kyle Conroy, Journey to the Center of Hawkthorne is now in its 69th iteration as the season 4 premiere looms.

The most recent version was released two weeks ago, and is a far cry from the game’s early days. Typical game mechanics like health bars and achievements are now there, while players can create weapons using materials they find in the game, much like they would in Minecraft.

Enemies, secret areas, and hidden raves abound, with the game paying increasingly closer resemblance to the 16-bit chaos of “Digital Estate Planning” while incorporating other aspects of the show (somewhat disappointingly, Dean Pelton has but two alternate costumes so far).

Cast members are aware of the redditors’ efforts, and the game’s recreation of a scene that was intended to appear in the episode (but didn’t, because Chevy Chase didn’t want to hang around to film it) brought one Community writer to tears. 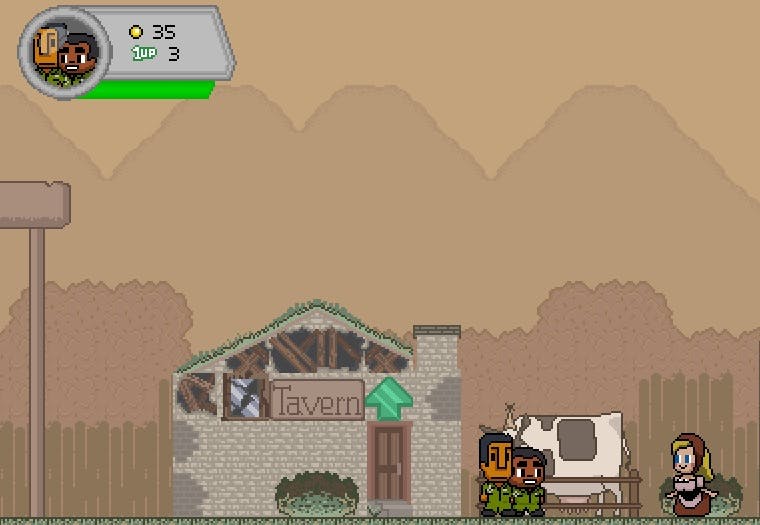 There’s still a long way to go before the project is done, though hundreds of Human Beings are checking out the game each day.

In an update late Tuesday, Conroy noted the milestone of 12,000 total subscribers to the subreddit, and wrote that the team is tracking how many people are playing.

Conroy recorded a live podcast along with fellow developer Jordan Hoff Wednesday evening to discuss some ideas for the game and talk about the new season of the show, which kicks off Thursday night.

The duo mentioned that while plans for a multiplayer feature (cool cool cool!) are in the works, the focus is on finishing the single-player version, which is “not anywhere near” being done. They also discussed cutscenes, being able to leave messages for others to discover when they jump into a level, possibly bringing the game to mobile devices, and rolling in references to season four episodes.

Conroy and Hoff joked they’d be working on Journey to the Center of Hawkthorne for the rest of their lives. Let’s hope, for their sakes and ours, they can finish much sooner than that.