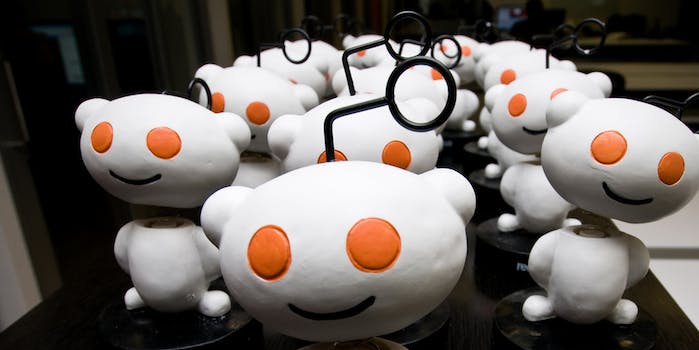 For better or worse, the Internet is shaping the way we talk, the way we write, the way we think. Perhaps nowhere is this more evident than in a Reddit comment composed solely of the most threadbare, overused Internet message board clichés—a stream of blogspeak Web-consciousness so painfully unfunny that only the most hardened cynic will be able to withstand the cumulative involuntary cringe.

Thankfully, this was the author’s intention, and so you’ll have to forgive us: This was nothing short of an epic win.

The paragraph in question, courtesy of one NuisanceConduct, was in response to the thread “what reddit fad are you glad died out?”. Instant reactions were along the lines of “Jesus Christ” and that it “was kind of like hearing your own voice recorded for the first time, only to realize how obnoxious you sound,” or “like that first moment when you realize you’re turning into your father (or mother, whatever the case may be).”

Here’s the post, with nearly 3,700 points so far, in all its unedited, unoriginal glory:

To be fair, I did nazi that coming. I came here to say this but boy, that escalated quickly so to the top with you! Lost it at ‘This is why we can’t have nice things’ and then my faith in humanity was restored, my mind blown, and manly tears were shed. Well said. As a ‘murican, I can confirm this gem has just won the internet and is doing it right. Just sayin’, I know that feel, bro, and while that was a risky click, this post was a 9/10, would read again. I see what you did there and it feels good man. You’re doing God’s work, son. I laughed way harder than I should have at your list that seems legit and totally nailed it. You – I like you. You magnificent bastard; you, sir, are so brave, a gentleman and a scholar, and seeing how you are a redditor for 4 years, this checks out, so I’ll allow it. I regret that I only have one upvote to give for this cool story, bro. CTRL+F “about tree fiddy” was not disappointed. Wait, why do I have you tagged as “NOPE NOPE NOPE”? Nice try, you monster. What did I just read? Dafuq? I read that as “YOU HAD ONE JOB”. I can’t fap to this. No true scotsman could see that this relevant XKCD was bad, and you should feel bad. You must be new to reddit, so I’ll see your cakeday and raise you a karma train. One does not simply rustle my jimmies, not even once. This stahp gave me cancer for science, so that’s enough internet for me today. OP is a fag, 2/10, would not bang. What is this I don’t even know how is this wtf? Circlejerk must be leaking. This will get buried but brace yourselves, some men want to watch the world burn right in the feels. When you see it, they’ll KILL IT WITH FIRE! But this has nothing to do with atheism. Lawyer up, delete facebook, hit the gym, and SHUT UP AND TAKE MY MONEY, said no one ever, so you wouldn’t download a strawman. Damn onions, you scary like a BOSS. whoosh. Since rule #1 is ‘be attractive’, I’ll just leave this here: This is my [f]irst post, be gentle. I have the weirdest boner right now, so I’ll be in my bunk with dat ass. Oh, you! …now KISS!!! I know you should never stick your dick in crazy, but DM;HS. …this kills the redditor.

In the meantime, I’ll show myself out.

As long as the ‘fad’ for plagiarising other peoples’ witty comments doesn’t die out, I guess I’m cool.

*edit: I accidentally a word

You still there? My god, you come out alive on the other side of a thing like that and you want to swear an oath to destroy meme culture itself. But I suppose this is the natural order of things: For a while, TV gave us the catchphrases that dominated our daily interactions; in the 21st century, it’s online communities that give us the inside jokes with which we may make ourselves understood—even so, I spy a few Futurama lines in there.

All the same, it’s undeniably time to put these many weary tropes to rest. They have served us well, made us chuckle when properly deployed, maybe even illuminated some fascinating element of a universal human grammar. Nowadays they can be considered irritating at best.

If nothing else, retiring these phrases will spare us the indignity of trying to explain them.