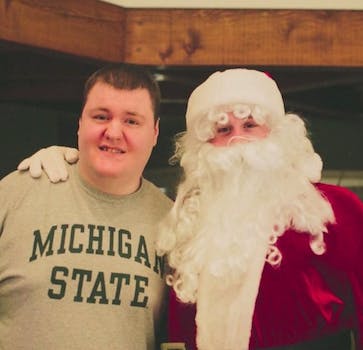 Redditor’s autistic brother gets a surprise visit from Santa

This video is a must-watch. Santa Claus made an emotional visit to the home of a huge fan this week: Trevor, a 21-year-old who has autism.

Santa Claus made an emotional visit to the home of a huge fan this week: Trevor, a 21-year-old who has autism.

Trevor’s sister Abbey wrote on Vimeo that her brother believes in Santa and looks forward to his visit every year. Her boyfriend, Jake, surprised Trevor by dressing as Santa and delivering presents. Trevor had no idea it was Jake and truly believed Santa had come to visit.

The heartwarming video was posted to Reddit, where it reached the top of the site’s r/videos section. While one redditor called out “Santa” for coming through the door rather than down the chimney, most took the sentiment to heart.

RF_Nevac, who has a 20-year-old brother with autism, wrote, “I am 99% sure my brother would act in the exact same way as Trevor and even though he wouldn’t seem very interested it would be the greatest thing ever for him.”

Watch it here, unless you have Vimeo Plus.