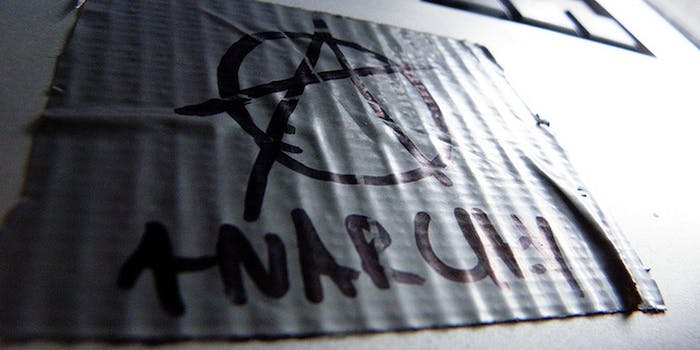 The ironic power struggles of Reddit's anarchists could teach us all something about how to handle conflict online.

In the real world, removing unpopular rulers from power is often a monumentally difficult task.

On social news site Reddit, it can be next to impossible.

That’s what members of the site’s anarchism community, r/anarchism, have discovered as they try to fight and sometimes flee moderation they say has become too heavy-handed.

Before you break out laughing over the notion that a bunch of anarchists are displeased with a hierarchical power structure, take a moment to consider their plight—and what it means for the future of the social news site.

On Reddit, moderators hold ultimate power in the sections they run. This includes the ability to delete comments and posts and ban users. Every subreddit, or section, requires volunteer moderators in order to perform necessary functions, such as reviewing spam complaints.

While Reddit is owned by an arm of magazine publisher Condé Nast, its day-to-day operations depend on these volunteer users.

Earlier this month, disaffected former r/anarchism members began posting across Reddit, calling out the subreddit’s moderators for ironfisted tactics, including what appeared to be censorship and indiscriminate bannings.

Those postings drew attention from many much larger corners of the site, bringing the 18,000-strong community’s internal squabbles to Reddit-wide exposure. In total, posts about the situation drew more than 10,000 pageviews, a notable number for such obscure, insidery subject matter.

On r/anarchism itself, dozens of posts sprouted up calling out the moderators for their behavior and claiming their actions were antithetical to the ideals of the political philosophy itself.

Some even took the fight to the Reddit admins—who are Condé Nast employees—asking them to remove r/anarchism’s mods from power. The admins refused the request.

But the community’s simmering anger first boiled over last year. That’s when the subreddit launched an “anti-oppression policy” that banned so-called “oppressive” language.

According to the policy, which provides guidelines for moderators in choosing which posts or comments to censor or which accounts to ban from the subreddit, oppression includes: “any language or action that expresses, reinforces, upholds or sympathizes with any system of social domination, including, but not limited to ableism, cissexism (transphobia), racism, misogyny, heterosexism, etc.”

Moderators interpret this as they see fit. But screen grabs posted by one redditor earlier this month show moderators declaring words such as “drama,” “insane,” and “lame,” (among others) to be “ableist” and banning or censoring redditors that used them.
The behavior became so controversial last year that the subreddit held a referendum in November calling for the moderators to resign.

“If this referendum is successful all of the moderators will be expected to surrender their power immediately,” wootup, the redditor who posted the referendum, wrote. “And if they do not they will be assumed to be authoritarians and dealt with accordingly.”

That referendum received over 1,000 upvotes; about 70 percent of those who voted approved it.

That was enough to convince seven of the 14 r/anarchism moderators to remove themselves from power.

But the rest stayed.

There was a fundamental flaw in the referendum, some claimed: Reddit doesn’t distinguish between votes from within a subreddit and votes from without.

That is to say, other subreddits with which r/anarchism frequently engages in ideological spats can easily hijack any attempts at democracy. A post in r/mensrights, for instance, clearly attempted to influence the November referendum.

In fact, r/anarchism moderators frequently use protection from outside attacks as a justification for harsh moderation. The anti-oppression policy itself was designed as a way to create a safe haven from intolerant places on Reddit, according to skobrin, one of the subreddit’s current moderators.

“We would not tolerate the slurs and bigotry that have become more and more commonplace on Reddit in recent years,” skobrin told the Daily Dot.

“I’m not sure that we’ve done anything in particular to rile up the community here,” he added .

One r/anarchism moderator stressed to the Daily Dot that, of the current moderators—the subreddit has signed up several new ones to replace the ones who resigned—only a few ban users or censor posts.

But at least one former r/anarchism moderator, TruthElixir, believes the policy went over the line.

“It had good intentions behind it,” TruthElixr told the Daily Dot. “To make people who were normally shunned feel like they had a safe place to speak without getting the normal Reddit trolls.”

TruthElixir stepped down in part because he believed moderators we’re overreacting to so-called troll commenters — people who specifically came to the subreddit to cause trouble. Reddit’s voting system was already handling that well enough, TruthElixir said.

“Usually troll comments got downvoted to where you couldn’t see them.” TruthElixr told the Daily Dot. “The community was handling it just fine on their own.”

As he told the Daily Dot:  “As absurd as it sounds to say, [the anti-oppression policy] was sort of a digital political pogrom, carried out under the auspices of creating ‘a safe space’ but which exclusively targeted dissenters.”

r/anarchism isn’t the only subreddit to face problems with an unhappy userbase. In just the past month, similar controversies have engulfed other popular communities, including the site’s rage comic section, a men’s forum, and a charitable community, r/favors.

In some cases, the vitriol was so heated that moderators became victims of abusive Reddit-wide campaigns against them.

These have been so vitriolic some moderators have told the Daily Dot they’re afraid to continue.

So what legitimate recourse do redditors unhappy with moderators have? The simplest solution: move. It’s easy to create your own subreddit and mold it as you see fit. Disaffected r/anarchism members, for instance, have recently set up alternatives at r/unmoderatedanarchism and r/referendum.

Yet there are few examples of new communities successfully replacing their rivals. Indeed, none of the new anarchism subreddits come anywhere close to matching the subscriber counts of their rival.

That’s evidence, perhaps, that many of Reddit’s hundreds of thousands of users simply don’t care about internal squablles.

As TruthElixir notes, while drama has occured in the comment section of stories posted to r/anarchism, the subreddit as a whole still functions well as a source for anarchism news.

“Once a subreddit has momentum,” he says, “its pretty hard to go away from it.”

There is one example of success, however.

Last year, members of Reddit’s r/marijuana community splintered off into new communities after the popular subreddit fell victim to heavy-handed moderation. One of those new subreddits, r/trees, quickly eclipsed the others.

According to redditor cinsere, who created r/trees, that subreddit’s success was due largely to a laissez-faire attitude towards moderation and censorship.

Cinsere compared moderation to real-world governance: with a light touch, the community flourishes; with a heavy touch, it turns on itself.

Once redditors discovered that r/trees was a safe place to post, it became popular and eventually reached a “critical mass” of subscribers, cinsere said. It now has more than twice the subscribers of its rival.

“It’s very easy when you’re on the computer: you want to set up your own government of sorts,” cinsere told the Daily Dot via Skype.

“These communities really are like little nations with some of the same politics,” he added. “Subreddits work well when there are benevolent leaders.”

Reddit’s admins — paid staff with ultimate power on the site — have made it very clear that they will not take part in internal power struggles on Reddit. (Though earlier this week, in an unprecedented move, Reddit general manager Erik Martin banned the 20,000-subscriber subreddit r/jailbait, already under scrutiny for its pictures of underaged girls, after moderator drama had “gotten out of control.”)

Who moderates the moderators is a frequent question on Reddit.

And Martin has an answer:

“The free market of redditors moderates the moderators. If you don’t like the way the moderators are cultivating their reddit then unsubscribe and join another subreddit or even start your own.”

As for whether r/anarchism’s problems provide a kind of case study in the political philosophy’s flaws, wootup, the rabble-rousing redditor who’s started many of the campaigns against r/anarchism, doesn’t think so.

It “does not reflect a failure of anarchism,” wootup wrote on reddit, “but a failure of hierarchy, since reddit intrinsically empowers moderators over subscribers, we have no means of putting an end to their actions.”

Which just goes to show that anarchists may never be fully happy on Reddit. But as r/trees and other success stories show, the right mix of anarchy and hierarchy may prove to be the real solution for building thriving communities.