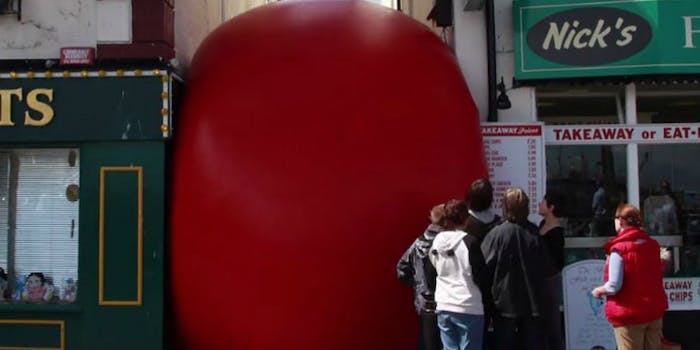 'Art has an element of risk.'

Only a few days after a giant red ball made its debut in the city of Toledo, Ohio, that humongous sphere of colorful happiness shattered the calm of the Glass City. Due to high winds and a brief storm of rain, the art project, appropriately titled RedBall Project, escaped from its stationary setting and went for a tour about town.

Basically, the ball rolled around wherever the hell it felt like it.

As the Toledo Blade reported, “Its time on the lam was short though, coming to a stop around the corner. The recovery team included members of the traveling crew, museum staff, bystanders, and a waiter from Ice, [Toledo Museum of Art spokesman Kelly] Garrow said. Some can be seen in a video sprinting after the ball as it turns the corner from Madison Avenue onto St. Clair Street.”

The ball was apparently damaged in a few spots and had to be patched.

And, hey, there’s the red ball on the move. Everybody, look out!

Luckily, there was minimal damage and no Indiana Jones types were in much danger of being rolled over by the ball. But perhaps the Toledo residents should have paid better attention to project creator Kurt Perschke, an artist from New York who’s taking the 15-foot ball on a tour of the world, when he introduced the ball and all its possibilities to Toledo.

Said Perschke earlier this week, “Art has an element of risk.”

The RedBall’s next stop is in Marseille, France, so to the citizens of that wondrous city, we have two words for you to consider: faites attention!!!