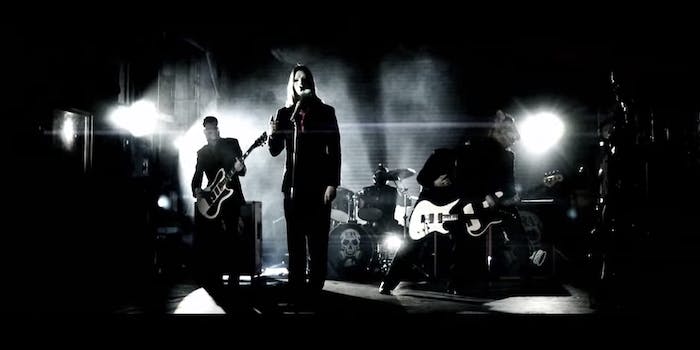 Here's how not to respond to a takedown request.

Ah, Red Jumpsuit Apparatus. You know them as… well, you probably haven’t heard of them, except possibly as the alt-emo band behind the one hit wonder “Face Down.”

But you might see their name in headlines this week, and not because of their plaintive warblings. It seems the Florida-based band left one photographer, how should we say, face down in the metaphorical dirt of copyright infringement. Now he’s had enough, and the Internet is having a field day.

Photographer Roland Anderson photographed the band at a Sydney concert in November. All was well until last week, when Anderson was scrolling through his Facebook feed and realized that the band had taken his striking original photo, sloppily cropped it to remove his watermark as well as the photo’s distinctive composition, and slapped it with a crappy red Instagram filter: 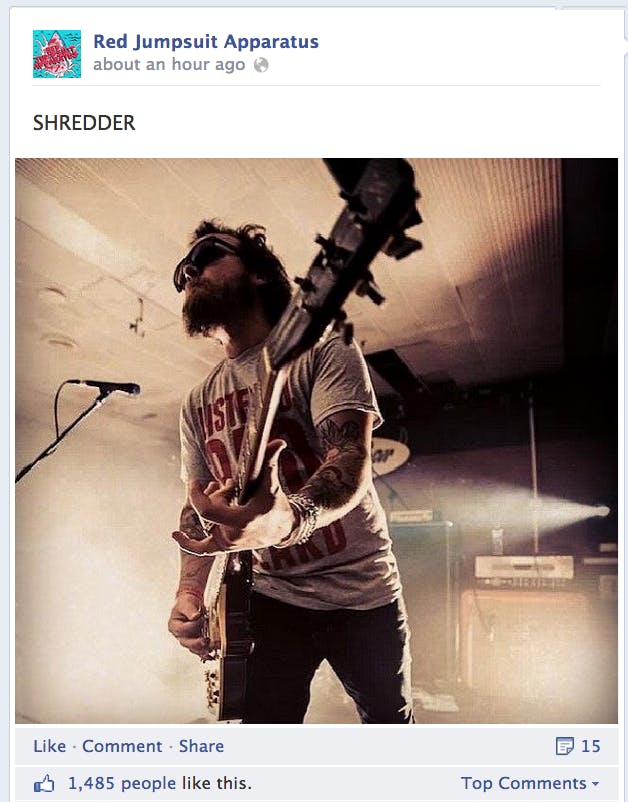 What’s worse, after removing the watermark, the post didn’t credit Anderson as the photographer or thank him for the use.

On his blog yesterday (cached version here), Anderson explained why that rubbed him the wrong way, and then described sending the band a polite email. In it, he explained:

“I’m a practicing photographer and I don’t shoot to just have acts steal the images for use wherever they please, I shot this show for a Sydney media publication. If you would like to use the image, you will need to discuss a payment with me beforehand.” …

On top of this email, a few friends and myself commented on the image stating the copyright of the image didn’t belong to them. After the email and multiple comments (which were quickly deleted), my name was added to the image after 5 hours.

Thoroughly annoyed now, Anderson wrote again informing the band that credit after the fact was not sufficient and he wanted the photo taken down. After his emails were ignored, he tried again via Facebook, only to be met with, er, this: 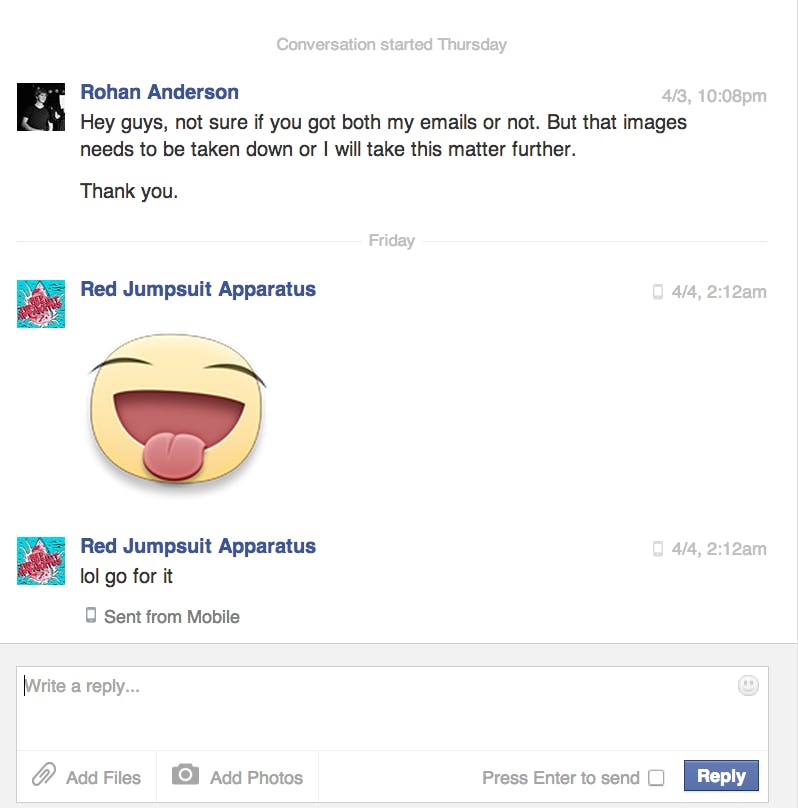 And it got worse. After sending this response, the band’s management finally answered Anderson’s email:

You have no legal claim as the photo is credited and is not posted for a monetary gain and features our likeness and image not yours. Also you have just got your self banned from any festival or show we ever play again in that region for life! Congrats!

Anderson wrote that he was “absolutely stun[ned]” at the response, not only because they banned him but because the band’s management seemed clearly ignorant of how copyright works. In this context, a removed watermark and a filter does not make it “fair use”. But a follow-up email makes it clear that the band actually just doesn’t care that they stole the photo, and thinks Anderson shouldn’t care either:

our music is everywhere illegally and we let it go like all other “professionals” try it out sometime.

The analogy to music piracy doesn’t quite make sense. After all, while it is hard to control the spread of music piracy, you wouldn’t expect one band to simply offer up copies of another band’s music for free without permission or credit, even if the song was about them.

While they finally removed the photo after 48 hours, the band accused Anderson, who continued to request payment for use of the photo, of being “abusive,” and even emailed the media outlet that had originally commissioned Anderson’s work. The band requested the media outlet’s assistance in dealing with Anderson, citing his “outlandish” demands:

If we didn’t grant photo access to begin with no photos would have been taken so this matter is pretty small to us however this guy “Rohan” has really gone out of his way to insult and harass us via e mail. … [W]hen this is all said and done he won’t be shooting many bands in the near future. Word travels fast in the rock business and we have a lot of friends because we try to avoid conflict when possible but “Rohan” is the absolute most disrespectful photographer we have ever had the unpleasure of dealing with.

But the band’s plea backfired. Instead, the media outlet’s editor read the entire email and Facebook exchange, and the editor “blacklisted” the band from ever appearing in the magazine’s pages again.

I’m quite frankly surprised by the bands flagrant disregard for copyright, suggesting you should be honoured for them to infringe it. Unbelievable.

For a band whose popularity has largely been achieved on the back of remix culture, where bandom thrives on the widespread proliferation of music and images on the Internet, it might be hard to grasp that the photographer does still own the copyright to an image. But it’s not an unreasonable expectation that a band with its own copyright infringement issues would know better. And the Internet apparently sides with Anderson. After his post landed on Reddit, Anderson’s site got so much traffic it crashed, and he posted an addendum earlier today thanking readers for their support.

He also made it clear that for him, the importance of copyright doesn’t just go away in the face of overwhelming cultural practices of infringement. As he wrote:

I honestly couldn’t care about the money, it’s the blatant disregard for copyright and the extremely unprofessional and childish behaviour that has got me worked up. At the end of the day, if you don’t fight for your rights, everyone, not just bands, are just going to steal images, post them for 2 days till everyone has seen them, then delete them, without paying for the use of the image.

We couldn’t agree more. BRB, photoshopping this speech over Anderson’s photo and posting it to Tumblr.