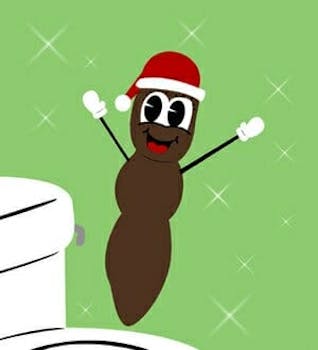 All cancers are not created equal. While breast cancer has ubiquitous pink merchandise and a sexy slogan, sufferers of rectal cancer have nary a ribbon to their cause.

But one rectal cancer patient is attempting to lighten up the diagnosis by making it the, ahem, butt of her joke. Michelle L. Dobrawsky wants to make sure the “funniest cancer of all” has an equally hilarious mascot to match — South Park staple Mr. Hankey the Christmas Poo.

“Mr. Hankey is festive yet dark, kind of like me,” she told the Daily Dot in an email. “Besides, while people don’t like to talk about cancer (especially rectal cancer), everyone can relate to Mr. Hankey!”

In an open letter on her Tumblr, the comedian and cancer patient implores the show’s creators, Matt Parker and Trey Stone, to license Mr. Hankey as the official ambassador for rectal cancer. She envisions a world where the crappy character endorses “a shade of lipstick and a candy bar” for the disease.

And that’s when the poo hit the fan. Dobrawsky’s campaign exploded after it was picked up by the Onion AV Club, the Huffington Post and at least a half-dozen other sites. Her Tumblr followers more than doubled. She still hasn’t heard back from the South Park creators, but has copied her letter onto Trey Parker’s Facebook page.

Dobrawsky, who was diagnosed in February, said she’s happy to get people talking about a tough subject.

“Other people with cancer, many kinds of cancer including colon and rectal, and with affected family members have all commented favorably on this and my blog in general,” she said. “I’d like to think I’m bringing a sense of humor to a subject that’s difficult no matter what.”