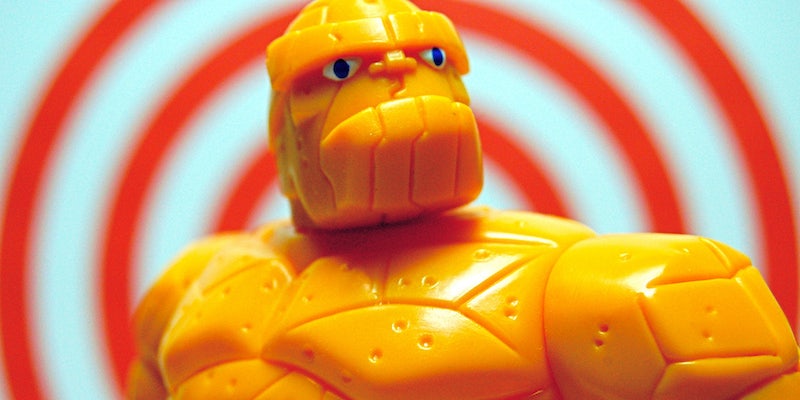 I received rape threats after criticizing a comic book

“Every woman I know who has any sort of online following gets harassed, and most of them get rape threats. It’s become part of doing business if you write online at all,” I explained to my dad a few years ago. He was shocked, as people often are.

Last weekend I called him and explained that I had finally hit that magical level and had received my first rape threats. What had I done to garner this level of ire from Internet trolls, you ask?

I’d written a review of a comic book cover and its company’s marketing strategy.

The comic in question was Teen Titans #1, which will be published in a few months by DC Comics. The review I wrote critiqued the flaws in the art, of course, but was really about the failed editorial planning and marketing direction for comics like this that DC puts out. I saw this cover as one more error DC was making that would alienate a potential demographic.

Don’t get me wrong, I love comics. I live and breathe the medium. My walls are lined with graphic novels and collections of comics that are diverse in content and in creators. I was qualified to write about this cover based not just on decades of reading comics, but a nearly decade-long career in the industry.

Among other jobs I’ve held in comics, I worked for years in the Batman office at DC and worked with a lot of top-tier comics talent. In addition to years of experience actually editing comics, I also have a Masters of Science in Publishing. My entire career, particularly the last five years, has been based around the study of broadening comics readership to wider, more diverse demographics and I am damn well qualified to critique the cover of a comic book.

The article about TT #1 ran at comics site Comic Book Resources and as soon as it was posted, the low-level hum of misogyny began. The commenters doubted my credentials and my secret “agenda.” I was accused of being a disgruntled former employee. Feminist was used as a dirty word at least half a dozen times toward me and there were a few bonus “feminazi”s thrown in for good measure. I was accused of trying to make superhero comics something they are not.

Most of those who disagreed with me got stuck on my two (out of 14) paragraphs about the teen in the foreground having large, unrealistically shaped breasts. A comics professional named Brett Booth (who didn’t draw the cover) took umbrage at my comments, which he viewed as an “attack” on the artist, and we went back and forth a bit on Twitter.

But all these comments were the kind I’d heard before. I’d had them said to my face. I’d heard them in my offices. That is just how too many guys in comics think they should operate—never trusting women to have opinions on comics and particularly on the portrayal of women in comics.

Simultaneous to the release of this article, I posted a survey I’m doing about sexual harassment in comics. If inclusiveness in comics is my primary motivator, sexual harassment is the thing most likely to raise my ire. I’ve experienced it. So have most of the women and some of the men I know in comics. It’s a problem for our industry and for many others that have traditionally been male, like gaming.

At some point, a few of those angered by my review of the Teen Titans cover decided to Google me and found my survey. They used this anonymous forum to say any number of nasty things to me.

Some comments were short and direct. Others read like bad fan fiction with the exception that everyone in them was being raped. Some weren’t about rape, but wanted to let me know that I was the worst.

My reaction to the rape threats wasn’t immediately fear. It was more of a Zen-like calm and a sort of “Oh, okay, here I am at that point now” moment. I deleted many of the less creative before it even occurred to me that I might be able to track them down (I’m working on tracking down the rest now). I mentioned the rape threats in passing on Twitter. A few comics pros reacted with surprise, and I started thinking about the whole process and the way men were talking about me and to me.

My post about the harassment has carried further than I imagined it would, as it is an ever-present part of my experience in comics that the women I know get rape threats. I’m one of thousands of women getting threatened with rape online. But for some reason my story resonated with comics pros and fans.

A lot of dudes wanted me to prove I’d gotten rape threats, often implying I was making it up for attention. Others felt it was derailing the true discussion, which was of course superhero breasts. Still others really wanted me to know they disagreed with me about the cover, but that they thought rape threats were wrong.

I get asked a lot why I stay in comics, given how often it can be unwelcoming to me and others.

There are so many good comics out there. I wish I could put into words the joy of cracking open a new comic for the first time and discovering it’s one that welcomes me as a reader. There are so many new worlds out there that I haven’t even discovered yet and that’s endlessly exciting. I love editing comics and talking about comics. And I am absolutely not alone. Young women are the fastest-growing demographic in comics.

The fans that want to scare women off with rape threats are doing the reverse: We’re digging in our heels and shouting from the rooftops that we will not leave.

This article originally appeared at XOJane and was republished with permission. Janelle Asselin has been a video gamer for at least 26 years, a comics fan for 20 years, and an editor of comic-type things for seven years. Besides her day job as a project editor at Sideshow Collectibles, she’s writing a book about selling comics to women, a monthly comic strip at Bitch Media called Don’t Be A Dick, and a weekly column at ComicsAlliance.com featuring female creators on the rise.