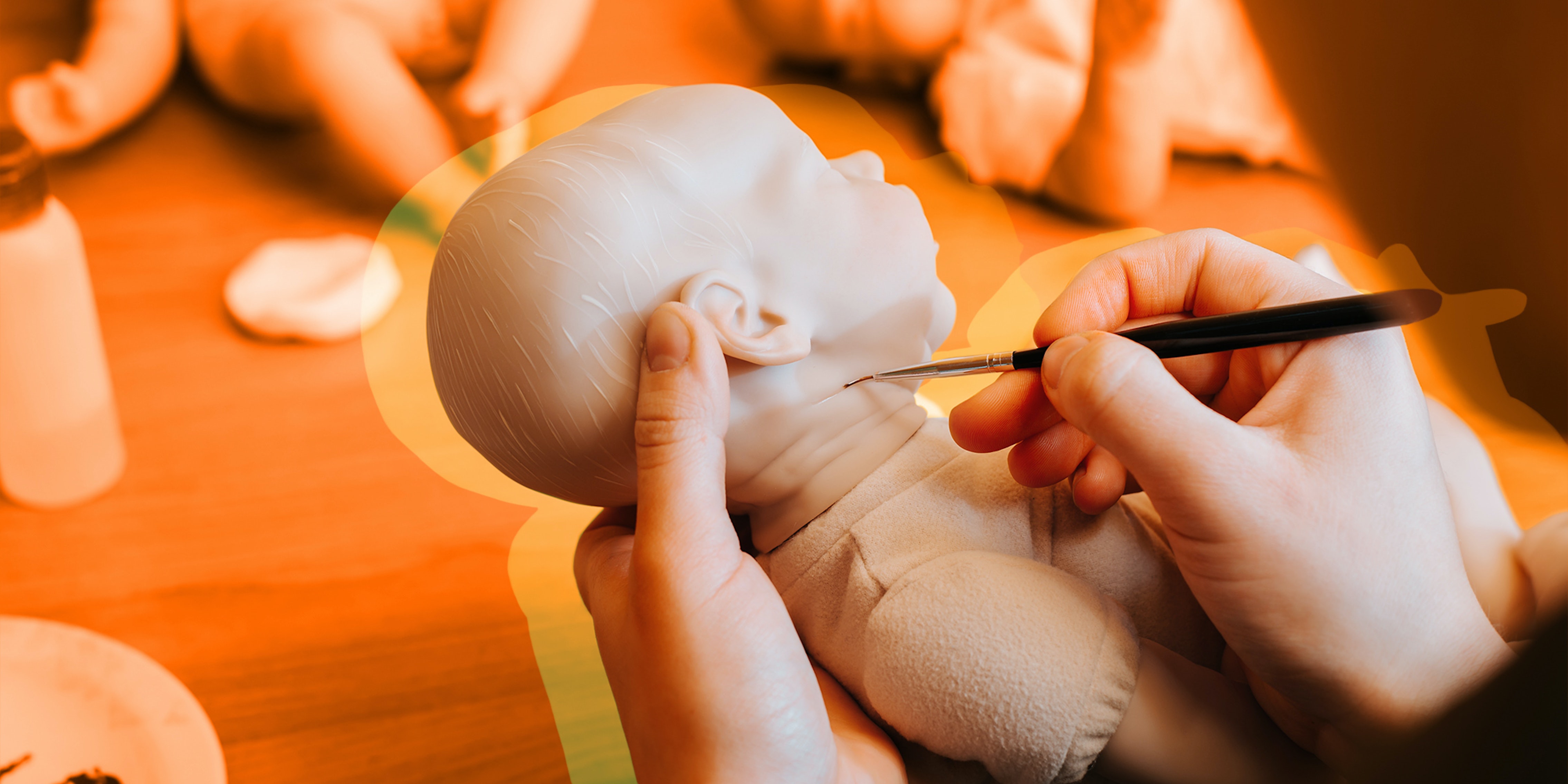 'I'm constantly dealing with hate comments and accusations about this issue.'

There’s no better place for normalizing the unusual than TikTok. From furries to reality shifters and adult age regressors, you can find a subculture for almost every interest, regardless of how niche or offbeat it might seem. But no matter how strong these communities are, eccentric subcultures oftentimes have to put up with a lot of hate. In the case of the community of Reborn doll collectors—aka, the collectors of hyper-realistic baby dolls, often used for therapeautic purposes—death threats, scapegoating, and long-lasting reputational damage became a risk after one of their own became entangled with the baby formula shortage scandal.

Reborn doll collectors (often referred to as Reborns) are one of TikTok’s most popular subcultures, with tags like #reborndoll and #rebornbaby amassing over 1 billion views combined. The price these collectors pay for their online popularity, however, can be steep.

Subreddits such as r/RebornsDollCringe inhabit thousands of users dedicated to mocking the collectors, with the subreddit’s description defining the collectors as “real people, with real problems, coping by being as as creepy as possible.” With over 65,300 users, users on the subreddit frequently reshare and mock TikToks by Reborn content creators—with this hate often spilling onto TikTok itself.

“I’ve had a huge amount of hate comments,” 26-year-old TikToker Jess (@rebornsofjess) told Passionfruit. “Most of the time, those are from close-minded people who think that dolls are for children or that I must be mentally ill.”

According to Jess, who shares her eight Reborns on her TikTok page with over 228,100 followers, the positive reception she receives from her videos far outweighs the negativity. However, some collectors’ response to the 2022 baby formula crisis has, she said, “given Reborn collectors a bad name.”

When the baby shortage started in February 2022, federal agents said the crisis would be solved in a matter of weeks. Eight months on, availability of baby formula is continuing to plummet. This shortage reached an all-time-low in June 2022, with CNN reporting that more than 20% of powder, ready-to-drink, and liquid formula was out of stock.

Controversy surrounding Reborn collectors’ alleged use of baby formula exploded over the summer thanks to one account in particular. With only 3,500 followers on TikTok, Brandy’s Reborn Bundles (@brandys_reborn_bundles) had an outsized effect on the community it’s part of. Tags related to the account, whose operator is a woman who goes simply by Brandy, amassed close to 1 million views due to the anger she’s caused.

One video shows her piling pack after pack of diapers and baby formula into a shopping cart; another shows her opening a fresh can of formula and scooping it into various bottles. In another, as her Reborn nestles in layers of blankets, a container of baby formula is next to a printed sign that reads: “For every follow I get I will put a scoop of formula in the garbage for you!”

The baby formula controversy on TikTok impacted many new families. In the last seven months, 43-year-old Kimberlee Lee welcomed six new nephews and nieces into the world. What was meant to be a time for celebration has instead been one of turmoil, as she told Passionfruit she and her partner spend their free days scouring supermarket shelves and even have to go out of state in an attempt to find and ship speciality baby formula to family members.

What makes things especially complicated for Kimberlee is that she runs the Rainbow Reborn Clan (@rainbow_reborn_clan) TikTok account, making her one of dozens of creators who have built an audience out of sharing their unusual hobby and raising awareness of the various reasons why people might collect Reborns.

“Reborns are used for so many different things,” she said. “Who [are] you to judge the way someone copes if they lose a baby, or if they have anxiety and depression?”

“Sometimes being in so much pain constantly can kind of put you in a dark place,” she explained. “So when I’m feeling down, or my pain levels are super high, I go upstairs into my doll nursery. I comb their hair, I change their clothes, and it puts me in a better mood. They make me happy.”

In an interview with Passionfruit, Dr. Pamela Rutledge, a media psychologist and director of the Media Psychology Research Center, discussed the common use of dolls in therapeutic settings.

“Any object that we imbue with meaning can have therapeutic effects, from teddy bears and dolls to worn objects like jewelry,” Rutledge said. “Dolls have been used in therapy for years.”

Outside of TikTok, Reborn dolls are most commonly associated with people who have experienced miscarriages and stillbirths, but many Reborn creators on the app are also people who have never experienced pregnancy at all and are unable to do so. For example, 36-year-old Dannielle (@rebornmamadee) told Passionfruit her fascination with Reborns started after being left infertile by a hysterectomy in her 20s.

“There’s something about holding a baby that’s naturally calming,” she explained. “It’s a comforting feeling that’s hard to put into words.”

Like many Reborn creators, Dannielle, who is known as “Mama Dee” to her 10,500 TikTok followers, centers her content around daily routines with her Reborns, which include taking them shopping, changing their outfits, and settling them down for a nighttime routine.

Like Dannielle, it is difficult for 21-year-old Noah and his partner Daniel to have children biologically. This is why, Noah told Passionfruit, he and Daniel’s joint TikTok account (@rebornxdads) is such a cathartic outlet for them.

“Our Reborns help with multiple mental disorders, and we have them specifically to help with depression, anxiety, agoraphobia, and PTSD,” Noah said.

Between the two of them, Noah and Daniel have eight Reborns. While Noah’s favorite is Winnie, who is the size of a 0 to 3-month-old baby, Daniel’s favorite is Riley: He’s their smallest baby and was made to be intersex.

“We want people, especially men, to learn and understand that they aren’t weird for loving/wanting dolls and that it’s okay for men to want to be parents,” Noah explained.

In fact, destigmatizing Reborn dolls is the driving force behind a lot of these collectors becoming creators.

“TikTok is literally worldwide,” Kimberlee said. “I like to spread my message as far and as wide as I can to try to normalize Reborns, because there’s a lot of girls and guys that hide their collection because of the stigma around collecting dolls.”

Unfortunately, these creators’ tireless work to destigmatize the hobby has been threatened since Brandy’s Reborn Bundles blew up, leading to countless redditors, Twitter users, and TikTok commenters scapegoating them for the crisis.

For some TikTokers like Jess, the “hurtful” accusations around using real formula during the shortage became so intense they were forced to make TikToks denying these baseless accusations.

“I’m constantly dealing with hate comments and accusations about this issue,” she explained in a statement to Passionfruit.

Another one of Jess’ videos, in which she reiterates that using real formula is largely uncommon within the Reborn community, amassed 2.3 million views.

“Most of us in the Reborn community love children. That’s why we have these dolls, and we would never take formula away from a child that needs it,” Jess said in the video.

Months on, the damage inflicted on other Reborn creators following Brandy’s viral videos has been harder to shift. As of Nov. 8, Brandy is continuing to post TikToks wherein she claims to be using and even “dumping” large amounts of baby formula.

Passionfruit was unsuccessful in reaching out to Brandy for comment due to her DMs and comments section being turned off and there being no alternative contact methods listed on her TikTok page.