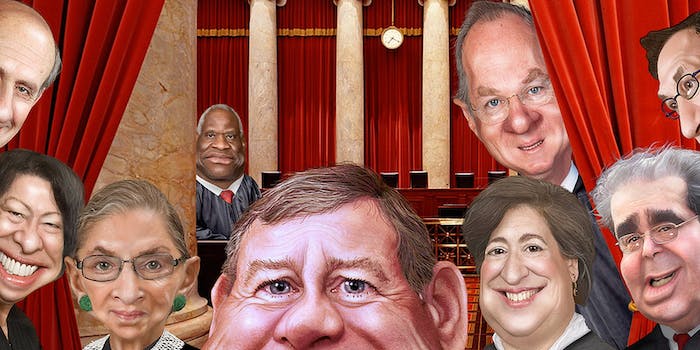 The real problem with the Hobby Lobby decision

This is how you get a highly dysfunctional and unfair system.

The Supreme Court’s recent Burwell v. Hobby Lobby decision, that will now allow some corporations to choose to not cover their employees’ birth control costs, made a lot of waves over the last two weeks. I’m no lawyer or doctor but it seems to me that the decision was based on dubious legal reasoning at best, could have major implications in all sorts of unintended ways, and seems to be tenuously based in medical fact. In other words the court got it wrong, but that’s just me.

Much of the commentary of Hobby Lobby has focused on themes like the continuing presence of sexism in American life, the changing nature of the Supreme Court, or systematic unfairness in whose needs and concerns get considered when we make political decisions in our society. These are all very important themes to be explored, but a lot of writing on Hobby Lobby in general misses the crucial point:

It’s our dysfunctional health care system’s heavy dependency on employer provided health care that opened this whole can of worms in the first place.

Despite conservative chest-thumping to the contrary, the American health care system basically sucks compared to the rest of the developed world. By any reasonable standard we pay a heck of a lot more than other nations and get worse results. And while there are many reasons for this, a big part is our heavy reliance on individuals’ employers paying for their healthcare plans. Consider just the basic outlines of this system:

Add in the fact that health care doesn’t behave like other markets at all and you get a highly dysfunctional and unfair system.

To be sure, Obamacare addresses a lot of these problems by letting folks buy individual plans and helping them pay for it if needed. It also makes sure plans are actually worth something and cuts subsidies for so called “Cadillac” health care plans that cover basically everything. The good news is it will probably move us away from the employer centric model in the long term. The bad news is that many of these core issues will still remain.

Which brings me back to the Hobby Lobby decision itself. The question of if a woman should use birth control and if so what type is, at its core, a medical decision that is best made between an individual patient and (in this case) her medical provider. The religious beliefs of her employer should be completely irrelevant in this whole process, but because the employer can claim that they are paying for it, it gets to be relevant. Which doesn’t make much sense.

After all would anyone in their right mind think that the religious beliefs of the owners Hobby Lobby should come into play about whether or not one of their employees can sleep in on a Sunday morning instead or going to church? Or spending some of her pay check on going to the bar on Saturday night and going home with some guy named Jim? Or course not, because we understand the idea that what an employee chooses to do on their own time and how they chose to spend their pay check is their decision and their decision alone. But because health care is “provided by” people’s employers, once the issue of birth control is raise suddenly the employer’s feeling about stuff comes into play.

In short a question that should be moot ends up being decided by five unelected (and largely Catholic) men because of our how our health care system works. Which makes about as much sense and Anthony Kennedy getting to be the “swing vote” on whether or not going home with Jim is a good or bad idea.

This isn’t to say that questions like sexism or systematic unfairness in the Robert’s Court approach to issues of law and justice aren’t relevant when talking about Hobby Lobby. They are! It’s just that if we didn’t have our current dysfunctional system of employer provided health care we wouldn’t have to worry about the feeling and religious beliefs of employers, because we’d understand them to be wholly irrelevant to the questions about which women should use birth control and what kinds they should use.

And we as a society would pay less for care and get better care, which would be nice as well.

John Anderson is a former student of political science and political professional who worked on a variety of campaigns in the Midwest and on the East Coast. He currently lives in Minneapolis where everyone is friendly and there are lots of lakes. He blogs at longwalkdownlyndale. This article was originally featured on The Good Men Project and republished with permission.