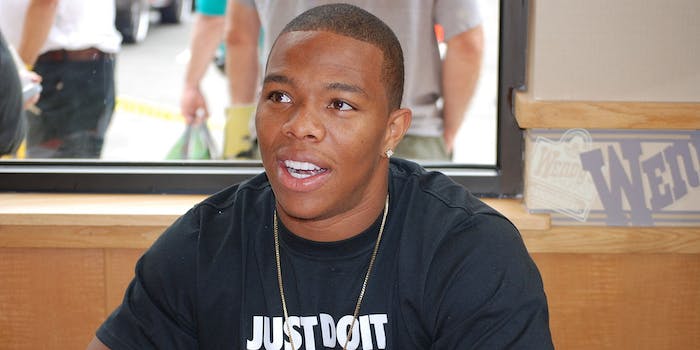 How not to respond to the Ray Rice assault video

Some of these quotes are unbelievable.

On Monday morning, TMZ reignited the awful story of Baltimore Ravens running back Ray Rice’s horrendous beating of his then-fiancée—by releasing the video of the assault. Many are calling for NFL Commissioner Roger Goodell to reverse the league’s weak punishment of a two-game suspension. There have also been calls for Rice’s arrest and for Goodell’s resignation.

However, because this is the Internet, there are also Ray Rice defenders oh-so-bravely making their case for why Rice shouldn’t be punished any further. Some of the arguments are laughable, others profoundly troubling, and still others are almost too unbelievable to be real. In the interest of rational debate, we present these tweets from Ray Rice supporters as an example of how not to respond to documented evidence of physical assault.

“What women will do for money”

@TMZ AND SHE marries him after getting knocked out LIKE THAT?! What women will do for money. #RayRice

People ain’t gone speak on the fact that he knocked her out BUT she STILL married him a weak later, maybe she like it #RayRice

“She hit him first”

“His chick came at him too”

People are going to talk about Ray Rice all day but aren’t going to look at the fact his chick came at him too. She not completely innocent

“She got knocked out when she hit the elevator”

Ray rice was innocent. She got knocked out when she hit the elevator not when he hit her?

.@ron_fournier ?? It’s bad but that goes a bit far. Second chances are important.

Getting right to the ridiculous point

I think Ray Rice is innocent.

Hypocrisy! But not really.

Special bonus entry: Fox and Friends, no. Just no.

The moral of the story is this: Don’t be an idiot. Any form of assault is wrong. Ray Rice isn’t being held to an unfairly high standard. He should be held to a normal human standard. If NFL football players can’t be expected to meet that standard, what does that say about the NFL?