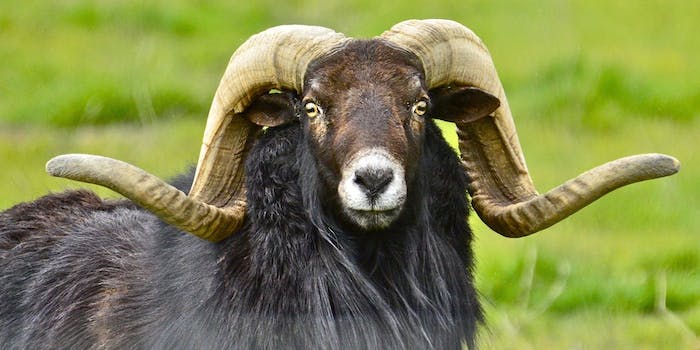 Ram gets the last laugh in epic duel.

Rams and Clint Eastwood have more in common than ewe might think. Both have lent their likeness to market automobiles for the Chrysler Group and both are notoriously grizzled curmudgeons with a low tolerance for bullshit. While Eastwood is all talk with his “get off my lawn”-style threats, rams put money to mouth: attacking young whippersnappers and their new-fangled GoPro gadgets and drone gizmos.

Yet, today’s angry ram video doesn’t have anything to do with technology. Instead, this battle for the ages finds this horned beast squaring off  against its arch nemesis the punching bag. Though the ram struck the first blow, things get wooly as the punching bag mercilessly pummels and mocks its opponent, swinging in from all directions and blind-siding it with red furry.

Ultimately it’s the ram that has the last laugh, delivering a Mortal Kombat-style “Finish him!” blow that sends its opponent toppling down the hillside.