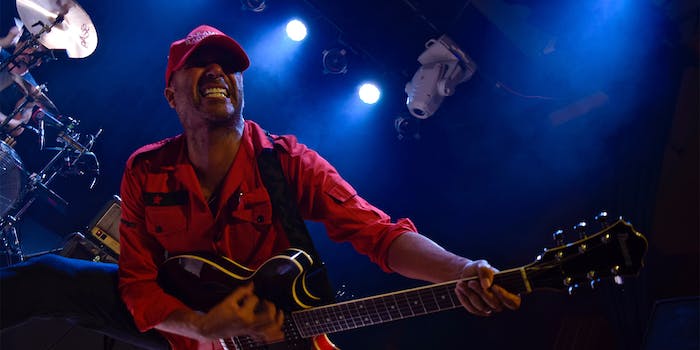 No matter what people requested, the station played only one song.

A Vancouver-based radio station changed formats on Thursday morning, but the station’s stunt to mark the change raised eyebrows and courted theories of a protest after it played nothing but Rage Against The Machine’s “Killing in the Name” for its final 30 hours.

Hints that something new was up in the air for Vancouver’s KiSS Radio (CKKS-FM) first arrived on Tuesday morning after on-air hosts Kevin Lim and Sonia Sidhu announced that they were leaving the station, pointing to a change in direction at the station.

“KiSS is changing and unfortunately we were informed that we won’t be part of this new chapter,” they wrote. “Although this comes with mixed emotions, we want to express one overwhelming feeling: gratitude.”

On Wednesday, KiSS Radio, which was a soft-rock station, started playing “Killing in the Name,” the 1992 protest song from Rage Against The Machine written months after Los Angeles police beat up Rodney King, on the airwaves. (The station opted for the radio edit, which censors the many “fucks” that appear in the song’s outro.)

And then the song started to play on repeat seamlessly enough so that there wasn’t any indication as to where it started and where it ended.

Soon, people started to notice that KiSS Radio was playing the son on a constant loop, and word of the song being played on repeat spread even further thanks in part to a viral thread from freelance writer Tracey Lindeman.

In a phone call with the Guardian, a KiSS Radio employee who asked to be called Apollo refused to explain what was behind the loop.

“I’m not allowed to say,” Apollo told Lindeman. “I’m just a guy in a booth, just letting the Rage play over and over.”

Given the legacy of “Killing in the Name” as a protest song, some people started to speculate that the song was actually a protest by staff after Lim, Sidhu, and other employees were let go.

But others pointed out that KiSS Radio’s ploy to blast Rage Against The Machine on repeat was probably a stunt. Stunts are a tactic used in radio in which a station will, seemingly at random, start acting drastically different from how it usually does to garner attention for something new; a continuous loop of a song or a playlist is among one of the ways stunting can play out.

By Thursday morning, “Killing in the Name” was still going strong. But at around 9am ET (6am PT), radio DJ Angela Valiant announced the launch of Sonic Radio on the air, which would play alternative music. But she also acknowledged the moment before noting that the station would mostly be a place to give listeners some kind of reprieve. (Now, when you go to KiSS’ website, a farewell message is now displayed in lieu of a livestream.)

“Tracey Lindeman of the Guardian said that ‘perhaps the real gift is that right now, even if it is a stunt, you can believe it is a protest,’” Valiant said. “Which is so beautiful because right now, there are a lot of reasons to protest. In the U.S., there are many protests about the overturning of Roe v. Wade and the passing of new gun legislation that affords guns more rights than some women. All over the world, protests about the invasion of Ukraine. Even here at home, protests to save old-growth, protests to investigate mass graves at residential schools. The song itself, a protest of an issue that continues to this day 30 years after the song was released of police brutality against people of color.”

Valiant then launched the first song of the new, which was fittingly “Killing in the Name.”

In the end, Vancouver’s 30-hour dance with Rage Against The Machine was a stunt over a protest. But during that time, it also made a lot of people happy, whether it was hearing the song on repeat or watching the frustration of people who failed to get KiSS Radio to play literally anything else. And it also got a bunch of people to do something that they might not do as often anymore: Listen to a traditional radio station.