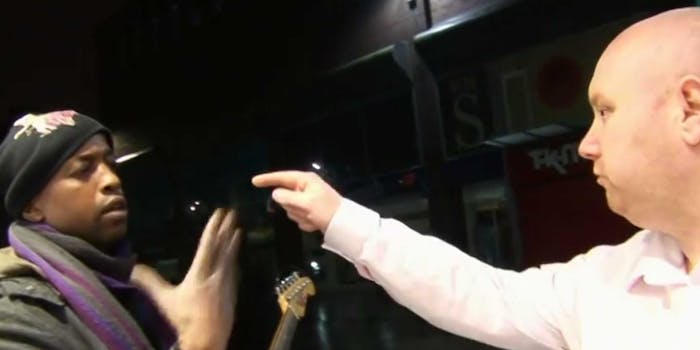 Probably wiser to pick on a guy without a camera crew.

In a segment of the BBC documentary The Streets that aired in the U.K. last night, an interview with an African musician is interrupted by two drunken louts who apparently wanted their racial insults and threats of violence filmed for the entire world to see.

The Glasgow busker, known as Melo, is speaking of friendship and creating joyful moments in life when an offscreen voice muttering “black bastard” becomes audible. Into frame stumbles a bald man named Francis Muir, who proceeds to attack Melo for his country’s ills. “What about the fucking British or the homeless?” he asks. “You are taking the fucking piss. You are milking our country for thousands, you fucking black bastard.”

“Much do you make sitting here busking every fucking day?” he goes on. “You’re making thousands. I pay taxes every fucking month. Hundreds of pounds to keep you in the fucking country.” Melo counters: “Can you play a note to save yourself? Can you play music?” Muir’s friend lunges at Melo, who pushes him back and ducks the wild punch that follows. The scuffle continues until police arrive and arrest Muir, who continues to hurl invective.

Muir, a father of one and a former nightclub bouncer, was jailed for four months over the abuse, which he claims resulted from a split with his wife of six years. Of the evening in question, he said he had no clear memory. While out on bail for that charge, he racially abused an Asian police officer and was sentenced to another six months in prison.

Now that he’s free again, Muir has done little but complain and paint himself as a victim, telling the Daily Record that he’s “not a racist” but “a really nice guy” who lost a job and can no longer secure employment because of the 2012 incidents. “That was nearly two years ago and I’m still paying for it,” he said, noting that because the altercation had now been televised, “I feel it will never end. I’m going to be punished all my life.”

Wonder who he’ll blame for that.