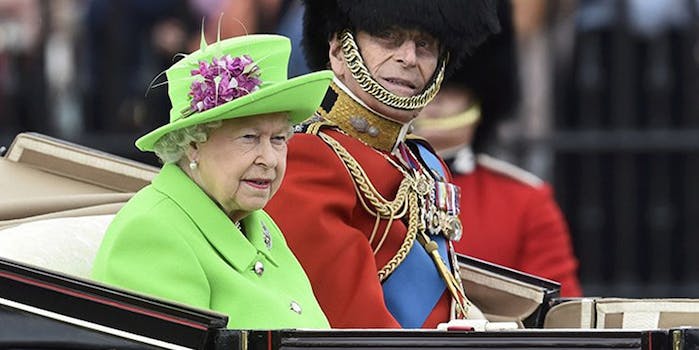 It’s a big freaking deal in London, with every royal who’s who in attendance and showing up in the hottest British looks to make a statement. Attendees break out their chicest pastel hues and the classiest headpieces.

And while Kate Middleton and the rest of the high ladies looked stunning in their various outfits, it was, of course, Queen Elizabeth who stole the show. She donned a lime green coat and hat which was adorned with a pop of magenta flowers. While some may drag the queen and liken her ensemble to being slime-timed at Nickelodeon studios, the empress easily pulled off the vivid colors.

Fans of the royal family and British fashion might have been busy going gaga over Trooping the Colour’s outfits, but the internet turned its attention to what the Queen’s pigment meant: Users could Photoshop the shit out of her.

Think of it as a wearable green screen. That meant madness ensued, thanks to the power of image editing.

Like turning Elizabeth into one of the Golden Girls—quite literally.

Did anyone order the cheeseburger with a side of British royalty?

Reporter: Who are you wearing?
Queen: Doge.

Check out the rest of the wacky creations that are fit for an unconventional challenge on Project Runway.

The Queen sure knows how to dress to impress.