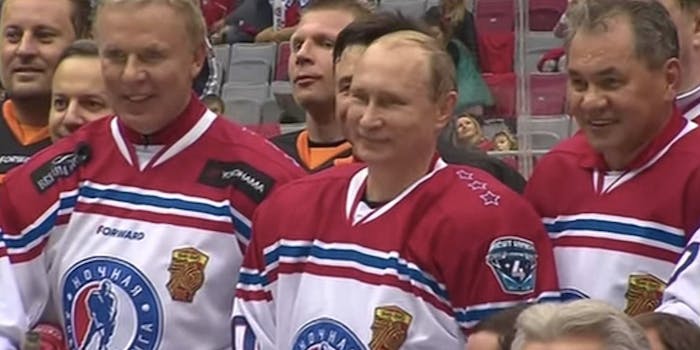 The Russian president is a man of many disciplines.

Vladimir Putin is President of the Russian Federation, but he refuses to be pigeonholed as such. He’s also a noted outdoorsman, equestrian, swimmer, and a black belt in judo.

He would also like us to know he is quite good at hockey.

Putin took to the ice in Sochi to participate in an exhibition match against professional hockey players. Not only did his team win, but Putin was the standout MVP of the game, scoring eight of his team’s 18 goals against the opposing team’s piddling six points.

If you are so inclined, you can watch the entire game below—after reading some of Mr. Putin’s famous hockey quotes, of course.

“You miss 100 percent of the shots you don’t take.”
—Wayne Gretzky and Vladimir Putin

“Could you defensemen please get out of my way? I would like to score now.”
—Vladimir Putin