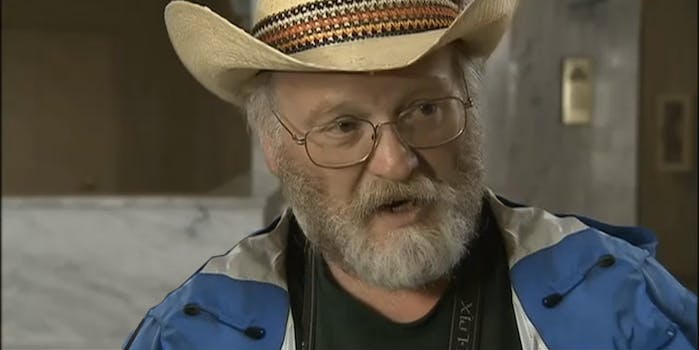 This surely isn't creepy at all.

Last week, you learned about David Van Vleet, a Washington man filing a public records request for the real names and addresses of exotic dancers at a local gentleman’s club. Since then, a federal judge has blocked his public records request. Meanwhile, Van Vleet has finally revealed the motivations behind it: He wanted the dancers’ names so he could “pray” for them.

Van Vleet was attempting to procure the entertainment licenses of exotic dancers at Dreamgirls at Fox’s, a gentlemen’s club outside of Tacoma, Wash. After Van Vleet initially filed the request for the public records, which are legally available under Washington state law, the dancers sued Washington’s Pierce County, arguing that if their real names were exposed to Van Vleet, it would pose a threat to their personal safety, as he likely had “nefarious intentions” for requesting such information.

Last Thursday, a U.S. district court judge agreed, ruling in a preliminary injunction that the dancers were entitled to keep their real names private due to the nature of their professions.

Needless to say, Van Vleet was not happy with the judge’s ruling. “I was trying to do something for the public good,” he told KIRO during an interview, adding that praying for the dancers’ souls “was ONE of many protected reasons” for why he was requesting the information.

By granting a preliminary injunction against access to the public records, the judge “essentially silenced 7 million people in the state of Washington to protect 70 peoples’ so-called right to privacy who dance on a stage naked,” Van Vleet told the KIRO reporter after the hearing.

Van Vleet’s “protected reasons” for seeking the public records likely didn’t come as a surprise to the sex-worker rights activists and privacy advocates who protested his request. They speculated that he was probably requesting the information in order to harass the women or directly evangelize to them.

When the Daily Dot reached out to Van Vleet last week to ask why he was filing the public records request, he sent us a “copyrighted and confidential” email to thank us for reaching out, because “a free press is a critical tool of a free people to live in a Constitutional Republic!” He also requested that we send a self-addressed envelope with our resume enclosed: “I am curious about why you undertook your studies and the calling you feel about a free press?” he wrote. “And if you will, the power of a dream in your heart as it ties all of the above together.”

The Daily Dot replied to Van Vleet saying that we were happy to comply with his request if he first answered our initial questions and then explained why he had requested our personal and professional information. We received no response.

We are not publishing Van Vleet’s full message, which contains his email and mailing addresses, out of concern for his privacy.

A hearing for a permanent injunction against Van Vleet is scheduled for December 15.