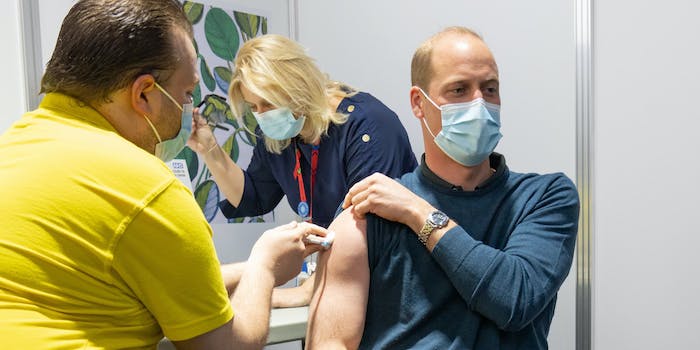 He received his first dose of the COVID vaccine this week.

Prince William revealed Thursday that he’s received the first dose of the COVID-19 vaccine, an announcement that’s since led to people debating the matter of his attractiveness.

The message, which was posted on the official social media account of the Duke and Duchess of Cambridge, is bland but gets straight to the point. William is wearing a mask and has his right arm exposed as a healthcare worker injects the vaccine into his arm. He also included a message of thanks to the people who made it possible.

“To all of those working on the vaccine rollout – thank you for everything you’ve done and continue to do,” he wrote.

But the focus and ire around the photo all centered on one particular part of William: his arms.

Beauty (or swoleness) is in the eyes of the beholder, and for some people, this particular photo of Prince William showed off buff arms on someone they perhaps did not expect it to.

But others were very confused about how people could thirst over Prince William—or even characterize his arms as buff. A more cynical read on it is that the photo opp is little more than a PR stunt designed to help repair William’s image after Harry and Meghan’s explosive interview from a couple of months ago that revealed systemic racism within the British royal family. (That being on top of the photo opp that a vaccine photo, by its very nature, already is.)

As Prince William shares his photo of getting vaccinated, it’s a reminder that while the vaccine rollout in the U.S. has expanded its eligibility to include people as young as 12, millions of people in the U.K are still waiting to be vaccinated. As of May 20, over 37 million people have received their first dose of the vaccine in the U.K.