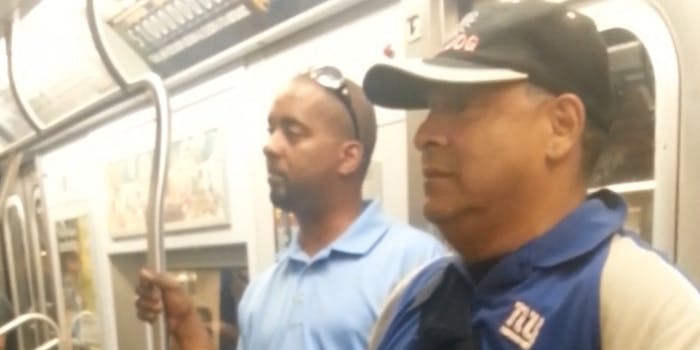 The concerned citizen who recorded the incident is asking for help identifying the two men, whose faces can clearly be seen on tape.

On Sunday night, after Pride festivities in New York City, two men on the F Train assaulted a group of LGBT youth. Footage of the incident has gone viral on YouTube, and the concerned citizen behind it is asking for help identifying the two men, whose faces can clearly be seen on tape.

One of the men loudly threatened to rape a gay man, and another physically assaulted the woman filming. Concerned bystanders repeatedly ask her if she’s OK. One man gets in between the youth and the other assailant and asks him to calm down, but he points at the woman filming and continues his tirade. The video, titled “LGBT Hate Crime New York Subway” currently has more than 75,000 views.

“On Sunday, June 30th at around 11:45 PM, I was riding home on the Queens-bound F train following a day of LGBT Pride festivities. Two men were loudly making homophobic comments, such as ‘Today was a scary day for me. There were fags everywhere.’ When a group of queer youth got on the train, the men proceeded to harass them, stating that the teens made them want to puke and that they would be killed if they were in Iran. The first assailant then threatened to rape them, at which point I took out my phone to document the incident.

“Seeing that he was being recorded, the first assailant lunged at me, violently grabbing my arms while trying to steal away my phone. One of the youth took the phone from me temporarily to protect it and told the assailant he shouldn’t attack a woman. When the assailant threatened to punch me, I took the phone back and ran to the other side of the train to push the emergency button and alert the authorities. At this point the second assailant got up and came towards me, grabbing my body and hands to try and get the phone to destroy the evidence. I yelled and told him I was an attorney. An onlooker then got up and stood between the assailants and myself, and another person left to get the train conductor.

“A group of people had gathered to stand up to the gay bashers. During this, the second assailant put his hand around the neck of a young queer woman.”

Right before this, the same young woman who is choked had yelled, “You’re ignorant.” Because you don’t agree with our lifestyle you wanna [hurt us]?” During a verbal argument, the first man also tells the woman, “You’ll die.” The men got off at the Roosevelt stop, but the uploader said they were headed to Jamaica, Queens. If you know these men, the video asks that you please alert the police, and if you were on the train and witnessed the assault, to go in and file a report.