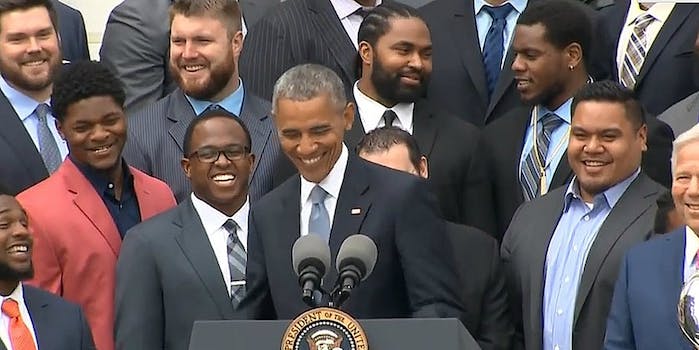 For beating the Seahawks in Super Bowl XLIX, the Patriots got a trip to the White House on Thursday to participate in President Obama‘s celebration of New England’s championship season.

And as per usual, Obama had jokes. He poked fun at coach Bill Belichick‘s wardrobe habits, and he told a story about tight end Rob Gronkowski and the Secret Service.

But he saved his best joke for the subject of #DeflateGate. If you don’t remember the scandal, here’s a quick primer: After beating the Colts in the AFC title game, the Patriots were accused of tampering with the footballs prior to the contest—deflating the air out of them to below legal levels.

After an investigation by the NFL, the league found that only one of 12 footballs had been deflated below the legal limit, and then the controversy pretty much went away. But Obama brought it back briefly with this sick burn.

You don’t see it in the video above, but that joke made Belichick laugh, and even Patriots owner Robert Kraft had to smile. Afterward, Gronkowski wondered aloud (jokingly) if Obama had been drinking because of the joke.

Still, it could have been worse for New England: there were no Aaron Hernandez jokes.