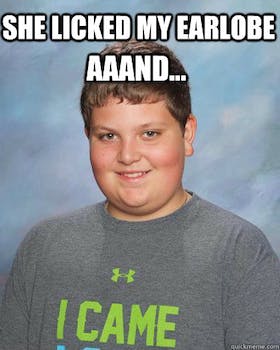 We'd hate to shoot our wad early and have a mess on our hands, but this poor kid is the newest viral meme on Reddit.

Have you come across Premature Peter yet?

The newest viral meme on Reddit, the site responsible for popularizing Overly Attached Girlfriend, the Ermahgerd girl, and Friend Zone Johnny this year, features what might be a school photograph of a chubby young boy.

He opted to wear this Under Armour shirt for the shoot, but unfortunately for him, the “I Saw” portion was cropped out of the picture …

First submitted to the r/AdviceAnimals subreddit by user voximusprime as “Premature Pauly,” a separate thread started by redditor mtldrummr112 redubbed the character “Premature Peter,” which resonated with users to the tune of more than 13,000 upvotes.

Here are some of the “Premature Peter” samples that have popped up since mtldrummr112’s post.

It didn’t take long for Premature Peter to inspire sister and even four-legged counterparts:

Finally, in case you were wondering how exactly the Premature Peter meme will play out, redditor ConspiracyCat offered a prediction.