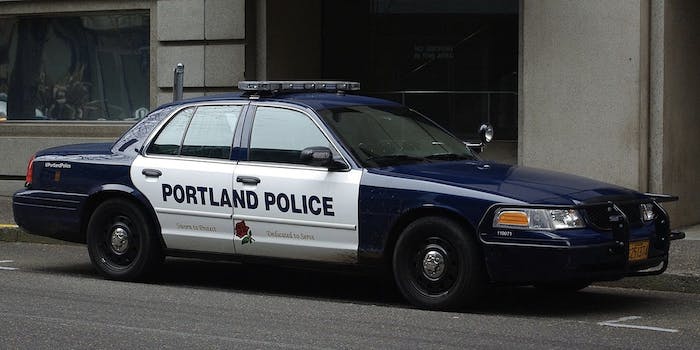 Well, that's not a good look.

The Portland (Oregon) Police Bureau probably should have read through their Twitter account before taking it from a “third party” years ago. Internet prankster god Jon Hendren (a.k.a. @fart) discovered Monday that their timeline had some very interesting old tweets.

Oof. Not a good look for a police department. Hendren apparently found some other questionable tweets, too, since deleted.

Fortunately, Portland police had an explanation. They’ve only controlled the account since 2009, when they acquired it from someone else.

@fart thanks for finding these.. we acquired this account from a “3rd party” in 2009. I guess we should go look through the old tweets!

That’s good. That means it wasn’t a Portland cop who tweeted about how good it feels to hold a gun, right?

@PortlandPolice @fart who was the police officer who owned the account, and do they still work for you

So who was this mysterious third party, anyway?

PPB public information officer Sgt. Pete Simpson told the Daily Dot via email that’s it’s not clear whether the previous owner of @PortlandPolice was an officer, “but it is fair to say that if they were, many of the tweets would have been inappropriate coming from an official account.”

The extent of the department’s interaction with the “third party” appears to be a brief conversation about taking over the Twitter handle, which ended when the anonymous owner gave the cops his account password via direct message.

“As unfortunate and embarrassing as the tweets were that showed up yesterday, it allowed us to now scrub the account from the time prior to it becoming an official government account,” Sgt. Simpson wrote.

“The lesson here for anyone would be that if they take over an account, to do a vigorous examination of the past and scrub any inappropriate information.”