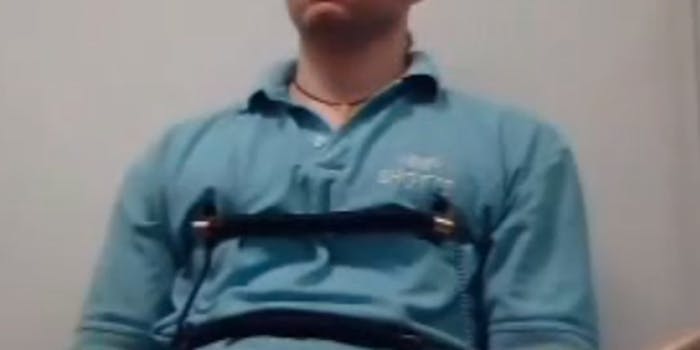 A Scottish man convicted a decade ago of killing his then-14-year-old girlfriend is hoping to get his case reevaluated after passing a polygraph test.

Footage of a Scottish man successfully passing a polygraph test while denying having murdered his 14-year-old girlfriend is now available on YouTube.

The footage, which was posted to the video sharing site on Sunday, is believed to be the first public record of a convicted killer passing a prison-administered lie detector test and may help to free the convicted man after 10 years in jail.

In June 2004, when Luke Mitchell, now 24, was 15, the Edinburgh, Scotland, native was charged with the murder of his 14-year-old girlfriend, Jodi Jones, a crime that he has long professed to have not committed.

A Scottish court declared Mitchell guilty 10 months after the arrest and sentenced him to a life in prison. But in April, polygraph tests administered by British Polygraph Association secretary Terry Mullins declared that Mitchell was telling the truth.

Knowing all prison-administered polygraph tests are videotaped, Mitchell and his defenders began lobbying for the tape to go public shortly after he stepped out of the chair. Last week, Scottish Prison Service officials granted the two parties permission to air the clip. The 17-minute video was posted on YouTube Saturday, where it’s received more than 13,000 views.

Their hope is that the evidence will rally enough public support for the Scottish Prison System to reconsider the length—or even the convicted guilt—of the longtime prisoner.

Mitchell is seen answering three questions that directly relate to the killing of Jodi Jones: “Were you present when Jodi was stabbed?”; “Did you stab Jodi on June 30, 2003?”; and “Did you know for certain where Jodi’s body would be found?”

To all three questions, Mitchell offers a brief “No.” Mullins said in a statement that he was “certain of the test result.”

“It’s absolute. I can’t believe Luke Mitchell was convicted on the evidence that was available.”

According to The Independent, Mitchell’s case is currently being reviewed by the Scottish Criminal Cases Review Commission, “which investigates potential miscarriages of justice and can recommend new appeals.”