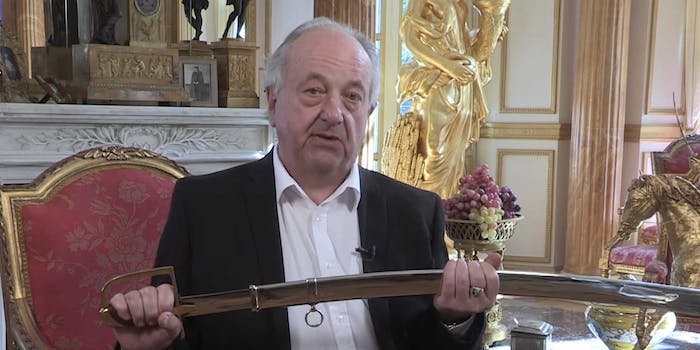 Yanek Zylinski isn’t just a monarch—he’s the old-school sort. Fed up with the anti-immigration rhetoric from one Nigel Farage, head of the right-ring U.K. Independence Party, the Polish prince took to YouTube to challenge the Englishman to an actual duel with actual swords.

Brandishing the saber used by his father, Andrzej Zylinski, leader of a calvary charge against the Nazis in 1939 that saved the lives of 6,000 Jews, Zylinski says that he has “had enough” of Farage’s “discrimination against Polish people.” The only honorable thing to do, he concludes, is to meet in London’s Hyde Park and resolve their differences “traditionally.”

Farage, who routinely complains about the U.K. being “taken over” by foreigners and that he sometimes rides the Tube for several stops before he hears English spoken, has yet to respond to Zylinski’s gauntlet-throwing, probably because he’s busy admitting that Ukip is a useless party with no meaningful amount of constituent support—even in its heartland.