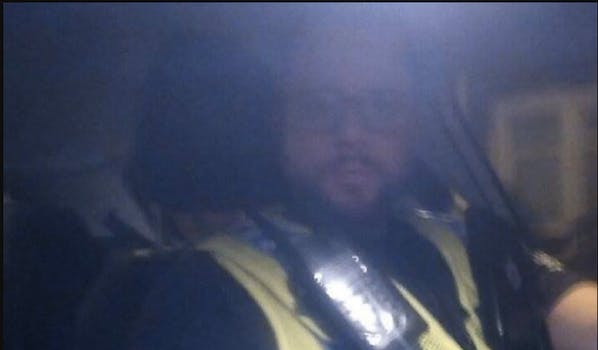 Police shouldn't normally break into your phone, but this worked out very well.

When police officers in South Wales came upon a drunken young college student and attempted to escort him home, they discovered he couldn’t remember his own address. So they did the sensible thing and borrowed his phone so they could ask his friends on their Facebook group chat thread.

At first, the other Cardiff 20-somethings in the “Pres Poosay” group chat thought their friend Cameron was screwing with them. They had just seen him, and he hadn’t seemed that drunk, Cameron’s friend Lawrence Court told BuzzFeed.

They helpfully posted Cameron’s house number, but the whole thing still seemed like a prank until one of the cops posted a selfie …

So last night the police interrupted our group chat in the most spectacular way 😂😂 pic.twitter.com/prA8HfJOu8

Yep, that’s a cop, alright. Or, as someone in the chat wrote, “Fuck me dead it’s legit.”

Not only did the police invade Cameron’s group chat without asking, they also changed his nickname in the group to “Such a VIP he has a police escort.”

In a time when our whole lives are online, and fears about law enforcement surveillance are high, it’s kind of scary to have cops popping into people’s private Facebook threads, no matter how well-intentioned they may be. But people online mostly just think it’s funny, especially the new catchphrase: “fuck me dead it’s legit.”

I think this was quite smart of the police :D https://t.co/X4NwzFz1wW

This is some seriously funny shit. ⬇️ https://t.co/6A5tM2zKbB

It could have been worse.  At least Cameron got home with just a hangover, not a citation for being drunk in public. The banter in “Pres Pussay,” now known as the most lit chat thread in Wales, presumably continued as usual.